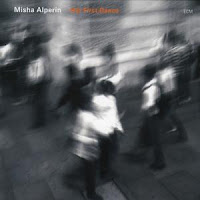 There was a time in my life that I bought all newly released ECM records, then still on vinyl (Jarrett, Old & New Dreams, Abercrombie, John Surman, Lester Bowie, Garbarek, Rypdal, ... the lot). After a while I got tired of their too polished sound. You can't give Manfred Eicher enough praise for what he and his label contributed to modern music, because there are few producers who managed to get such a decisive role in shaping a musical style without actually playing music. Furthermore he managed to create a sublime and unique positioning for his label, with very clever and consistent design and a superb sound quality.

Yet once in a while, there are ECM records that grab my attention, like the recent John Surman, or Terje Rypdal, or Dans Les Arbres or this one.

This record is ECM at 100%, no question about it. Ukrainan pianist Misha Alperin plays his piano in a style which IS ECM, finding a genre between classical and jazz, with a very melancholy atmosphere, very subdued, never raising his voice, deeply emotional and full of the usual ECM aesthetic. And even when the tunes are a little more uptempo, which is only the case with "Jump", it is closer to Mozart than Oscar Peterson, joyful and lyrical. On half of the tracks he is joined by Arkady Shilkloper on french horn and flugelhorn and/or Anja Lechner on cello. Most tracks, but especially those with the guest musicians, are so sad, so melancholic, that my heart melts and that I crumble to pieces. There is no dissonant sound to be heard, there are no wild jumps into the void of the unknown, but that's not the point. What he does with "the known" is already strong enough, creative and really worth listening to.