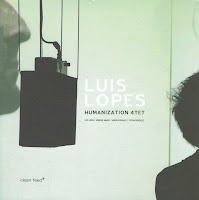 I had never heard of guitarist Luis Lopes, and kudos to Clean Feed again for giving a lesser known musician a chance, because he deserves it. His Humanization 4Tet further consists of Rodrigo Amado, whose sax-playing and sense of music I've already recommended before, and with Aaron Gonzalez on bass and Stefan Gonzalez on drums, two young musicians with great skills and even more ideas. Lopes's playing is straight-forward, with a bluesy electric sound, more focused on delivering great music than on pyrotechnics or avant-garde excursions, and that's the overall nature of this album. The compositions are nice, with great themes and especially nice improvisations. Lopes is really in full service of the band he assembled here, as self-effacing as can be, leaving lots of room for bass, drums and sax. On the second track, dedicated to Pier Paolo Pasolini, his only contribution is to add eery feedback sounds and colorings of sustained notes. The third track, dedicated to physicist Stephen Hawking and called "Principio Da Incerteza", starts with a long and strong unison theme, and in line with the title, it brings changing rhythms and tempi, even to the extent that all rhythm, structure and melody dissapear for a powerful open improvisation. Again, Lopes adds sparse notes, but well-chosen, with the right timbre and sound, offering depth to the sax, bass and drums that really carry the tune, that gradually gathers momentum again, leading back to the original theme. "Big Love" is dedicated to Joe Giardullo, which is an excellent idea by the way, and it brings a more abstract energetic melody, which, as on the other tracks immediately leads into a sax solo, which is also a good idea because Amado truly is a great sax player. His tone is warm, his phrasing complex and focused. And what about Lopes? Well, at the climax of Amado's solo, somewhere half-way the tune, when bass and drums have propulsed the sax into higher space, Lopes again adds support, by offering mute echoes and little sounds of admiration, enriching the whole without taking the lead voice. "The Long March", starts with a long bass intro, joined by the drums once a fixed, and indeed march-like vamp has been established, and both sax and guitar join for the nice melodic theme that seems to end with an open question mark. Lopes then plays a solo. It is slow. It is full of openness. It is precise. It is deep. It is beautiful. And the way Amado takes over is brilliant, joining on the same note, extending it and then moving on, intensifying the piece a little, but not too much, moving it into more extravert regions. The last track starts in a totally improvised context, with all four musicians interacting in a hectic way, Amado full-voiced, Lopes with muted distorted guitar sounds, breaking into yet another unison theme, as a lead-in for Stefan Gonzalez to give a fierce drums solo, joined by Amado with a no less fierce sax solo, and then the bass joins, with the guitar adding shredded muted heavy notes, slowing down the massive sounds, bringing the guitar back to normal tones, with again bluesy, very emotional playing, very direct, sounding uncomplicated but again, precise. The strange thing about Lopes's music is that despite the fact that he clearly has a free mind, moving the band into very free territory at times, that he sticks to the usual intro theme, then improv, then repeat theme to end, as if that kind of structure is needed or required. This is a great and stylistically balanced CD, by a musician who deserves more attention, and one who certainly deserves the prize for the most self-effacing participation on his own release.