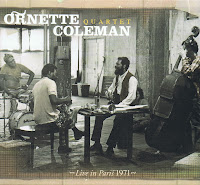 Sorry guys, but here's another Ornette Coleman re-issue. The recent success of Soundgrammar, and the Pulitzer Prize he got after that, made record companies do some digging in their archives, looking for ways to surf on the waves of public attention. And that's fine with me, any reason is good to give us more Coleman material from the 60s and 70s. This record is a fine one, with the double sax front of Ornette on alto and Dewey Redman on tenor, with Charlie Haden on bass and Ed Blackwell on drums. It's recorded live in Paris in 1971, with a sound quality that is much better than the recent "Belgium 1969", although a little less adventurous musically. Two tracks, "Street Woman" and "Rock The Clock" come from the Science Fiction album, released in the same year. The second track "Summer-Thang" is an unmistakable Coleman composition, joyful and typically harmolodic, with great improvisations from all four musicians. In the last track, things get a little out of hand, with Redman playing his shrill musette, with the sound quality dropping a little and Coleman disappears into the background and Haden starts using a wah-wah for his bass, but despite the lack of coherence, it is still worthwhile - but I really would have loved to hear Don Cherry as part of the band, but he was having his own musical adventures at that time. Not an essential recording, but still nice to hear.