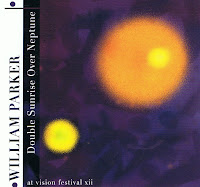 William Parker announced that 2008 would be a year of cosmic music, and of course he knew what he was keeping up his sleeve, and it surely not only referred to this album, but to the three albums that AUM Fidelity released in the Arts For Art funded project, which also includes Roy Campbell's"Akhnaten Suite" and Bill Dixon's "17 Musicians In Search Of A Sound : Darfur". Parker moves it even a notch higher : more cosmic, and more worldly at the same time. Cosmic because this music is as expansive, broad and overwhelming as can be, while at the same time offering the solidity of earth, and all the musical forms and genres it produced into a unique synthesis. The AUM Fidelity project resulted in three absolutely majestic albums, with a common element : they are absolutely musically innovative while sounding extremely familiar at the same time, as if they've tapped into some shared human musical subconsciousness that is suddenly awakened and brought to live.

William Parker is a great artist because he keeps innovating and he keeps renewing himself and his music. It doesn't always work, but that's the risk you take by being courageous and adventurous, but when it works, you get something you've never heard before. This is surely one of his most successful endeavors.

The musical concept in itself is simple : the foundation of the music is the bass, with assorted percussions to support it, bringing a repetitive vamp, an hypnotic line, very African, going on for ever. Over these rhythms, themes come and go, played by the horn section, or played by the strings, or by all, and the musicians alternate by improvising on the theme. Parker calls it the tree trunk, the branches and the leaves in his liner notes. But of course making this work is far from simple, it is a task of extreme complexity.

The most special thing is the presence of Indian singer Sangeeta Bandyopadhyay, whose singing soars over this band like a bird over the jungle, with long microtonal shades and nuances, full of joy and emotion, full of rhythm and sadness. It is not only stunning, it is also absolutely unique. Parker's love for the female voice and his open-mindedness for music and cultures from around the world led to this brilliant idea. Second great idea is to have oud-player Brahim Frigbane in the band, adding warmth and intimacy to the sound, while of course adding the Middle-Eastern touch and sensitivities. Frigbane is not only great in his solos, but also a very important factor in supporting the bass line. The reeds of Parker and Cole bring the North-African touches to it.

And if that was not enough, some of today's modern jazz string-players play their part as well, with Jason Kao Hwang and Mazz Swift on violin, Jessica Pavone on viola, and Shiau-Shu Yu on cello, adding some classical and Asian touches at the same time.

... and of course William Parker himself on double reeds, doson 'ngoni and bass.

But having a great band is one thing, making it perform well and making great music are still other things. Despite the hypnotic and trance-inducing rhythmic backbone, the music changes the whole time, like waves, like tides, with themes and players coming and going, moving forward, moving backward, in layers upon layers, often controlled and disciplined, but once in a while going wild and chaotic. All band members get their moment in the spotlight, all playing in their own style, bringing a wonderful mix of emotions in the same song : the nervous and energetic guitar, the sad and plaintive violin, the soft and warm oud, the raw and wailing sax, the clarity of the joyful trumpet, the never-ending percussive drive.

And when you think the end of invention has stopped, there is a wonderful call and response piece in the last track with Rob Brown echoing Sangeeta Bandyopadhyay's heart-rending singing, with the horns fading away and the strings taking over with another theme, while the guitar and bass keep repeating and repeating the same few notes, and then listen how the violins echo her improvised singing to perfection, listen to the subtleties, the wonderful sensitivities, ... staggering ...

The biggest achievement of the album is that it all works to perfection : tight interplay, wild improvisations, wonderful rhythms and themes, the power of a big band with the sensitivity of a small ensemble, it is dark and refreshing, familiar and new, tribal and universal, expansive and intimate, control and chaos, emotional and soulful, bringing the most unbelievable cocktail of genres and styles, and it works ... it works ...

... this is music that the whole world should hear ...

stef
Title of this album is "double sunrise..." not "double sunshine..."

...of course, thanks Wojtek!

Another winner from Aum Fidelity! Can't wait to see William Parker back on stage in Belgium! A true master who never fails to amaze me!

Parkers plays in Antwerp with The Roy Cambell Quartet on September 6th.

great review, even though i haven't heard it yet.
in fact, i'm gonna look for it, and buy it, right NOW

i noticed i was being a bit too impatient. i'd never thought of checking the aum-site before; they seem to offer a great bunch of cd's at affordable prices. nnnice

Indeed, the release is only available as of August 12, but I got an advance copy. Good for me, and truth be told, I couldn't wait to share my enthusiasm. Sorry for frustrating you all.

Most overrated album of the year.Dull,monotonous grooves.
Doesn't hold up.

This is an absolute brilliant album. Perhaps not everyone's cup of tea, but musically one of the top jazz albums comparable to A Love Supreme and Black Saint & the Sinner Lady.