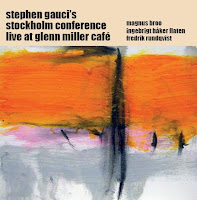 Here is another major hit for Ayler this year : New York tenor saxophonist Stephen Gauci teams up with some well-known Swedes, Magnus Broo on trumpet, Ingebrigt Håker Flaten on bass and Fredrik Rundqvist on drums, in the typical line-up which he seems to favor the last years. Recorded live at Stockholm's Glenn Miller Café, this download release contains two lengthy pieces, the first one a Sonny Rollins tune "Sonnymoon For Two", the second a group improvisation called "No One Knows Which Is Which", and what the album lacks in some of the superb subtleties and great musical shades in his recent studio recordings, is largely compensated by the fun and emotional depth of the performance. Here are four musicians really enjoying themselves, demonstrating their talent and skills for interplay and hard-hitting free music. But it's not all fire and intensity, the long pieces, and especially the second one, allow for expanded down-tempo melancholy moments, where the individual instruments can shine, playing bluesy themes, gentle and soft, deep and true. This download release is by itself an entire album worth of music, yet it's actually the third part of the recorded music. I haven't heard the double CD which is not available for download, and which has Mats Äleklint on trombone on the first CD and Magnus Broo on trumpet on the second. The entire CD is worth looking for, definitely if it has the same level of qualitative music as the download version.

Available from Ayler Records as a download only release.