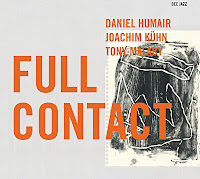 Swiss drummer Daniel Humair and German pianist Joachim Kühn released their first album together in 1985 ("Easy To Read"), and now, for Humair's 70th birthday, they join forces again, for the first time with Tony Malaby on sax and without a bass. Half of the tracks are newly composed, some others come from previous occasions. "Buried Head" figures on Tony Malaby's "Tamarindo", "Ghislène" is "Guylene" (why the different spelling?) from "Easy To Read", and "Salinas" by Kühn from "Triple Entente" (1998). All three musicians have a fantastic track record in the jazz scene of the last twenty to forty years, and have played in all kinds of settings and genres, from traditional bop and mainstream to more free jazz and fusion. And it's interesting to see that amongst the three of them, the overall mode is free, with often wild improvisations, yet strongly anchored in structure and often with a harmonic basis, even if that's not always so apparent. The same holds true with the rhythm : it is there, sure enough, but more often implicit than anything else. The absence of a bass pushes the three musicians to fill that void, especially the drums and the piano, by going into the lower tones, yet Humair clearly prefers adding to the music, accentuating, participating in creating the overall texture rather than filling in the rhythmic gaps. That gives the music a little more of a harsh and abstract sound than we would expect, but it is all the richer for it. Most tracks are complex and offer lots of variation, changes in tempo, in intensity, moving between slow sensitive lyricism and thundering abstract rawness. All three musicians are in absolute top form, throwing in a wealth of ideas and emotions, feeling perfectly comfortable in this world of musical contrasts and paradoxes, reinforcing each other or bouncing off ideas. Humair is precise, intense and creative, Kühn less romantic than I know him, more percussive than you would expect, yet always lyrical, and Malaby is the perfect fit, free, deeply emotional and also very lyrical, re-using successful phrases from Tamarindo (even on other tracks), even using some from Coltrane, with the superb tone and richness in feeling that he's been cultivating over the years. "Full Contact" is superb.