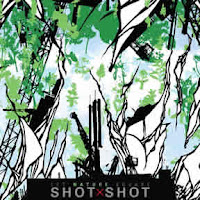 Two years ago I was more than charmed by ShotxShot's first release, a live album, and their second album sounds just as solid as the first. The quartet consists of Dan Scofield on alto saxophone, Bryan Rogers on tenor, Matt Engle on bass and Dan Capecchi on drums. The music is real modern free jazz in a style that I like : warm, open-ended, emotional, low-tempo yet also very intense. There is only one short track, by Matt Engle, which is more uptempo and composed till halfway, when the tempo suddenly changes, the rhythm turns odd and the improvisations can begin. The four long tracks work with composed parts and agreed concepts, yet just to build a framework for the strong and long free improvisations, in which the four musicians almost permanently play together, including both saxes, creating interweaving lines and phrases, especially on the contrapuntal "Overlay", carefully listening and interacting, and you never know what's going to happen, one sax may come to the foreground with the other one retreating a little or both come forward, creating a flowing feeling, moving forward, with the rhythm section as crucial to the music's development as the horns. The calmer the music gets, the better it becomes, intensifying, becoming maybe more vulnerable and emotional, as on "Oh No"on which the solos, including a long bass solo, are among the best on the album. What I find powerful about this band is that they manage to create their own voice, or even a signature sound after only two CDs, and this in a very crowded jazz environment, stylistically coherent, and with a strong emotional and creative focus. Great music!