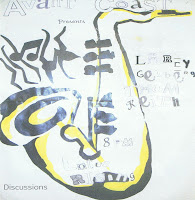 Avant Coast is a young free jazz band from the East Coast, with Larry Gelberg on baritone and tenor saxophones, Thom Keith on baritone and tenor saxophones, Tim Webb on bass, and Jared Steer on drums. The music they bring is free, relatively downtempo, but with a steady rhythmic pulse and great sax improvisations. The first track "Ole" is the John Coltrane composition, and while maintaining the Spanish rhythmic influence, the tune is more intimistic here, less expansive than Coltrane, but that would be a tough achievement for any sax-player. The second track is Mal Waldron's "The Seagulls Of Kristiansund", and is probably the highlight of the album, both for its sensitive and melancholy playing, especially powerful because of the depth of the two baritone saxes. The third piece, "The Agitator", composed by Keith, is uptempo, with a funky vamp, offering each musicians his solo moment, but above all demonstrating that they are able to create music with character. And that's possibly what they need to do more : create their own voice, dare go a little bit further into unchartered territories, but it's a nice debut.