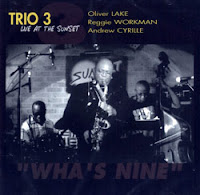 This is the 5th album by Trio 3, the great trio consisting of some of free jazz most longstanding musicians, Oliver Lake on alto sax, Reggie Workman on bass and Andrew Cyrille on drums. With his 64 years, Lake is the youngest, Cyrille's 69 and Workman 71, but they are still going strong, with nothing left to prove, having played with such luminaries as John Coltrane, Cecil Taylor, Julius Hemphill, Anthony Braxton. They call themselves "the group where music is the leader" and that is apparent not only from the playing itself but also from the compositions - there is no need for anything less than playing in the service of music : direct, full of fun, emotions and creativity. The great thing about the album is the absolute unrelenting energy these guys still muster, their attack is powerful throughout, even on the slower pieces as "Amreen" or "ZC", always rhythmic and melodious, never losing track of the theme. Apart from the title track, highlights on the album are the Reggie Workman composition "Willow Song", and Cyrille's "Striation", the latter a tune which kind of desintegrates but without losing its rhythmic base, and the last tune "Hassan" is the band at its best, going full force for a quite enthusiastic Parisian audience. The music itself is nothing new, nor is the performance itself, but the quality of these three musicians is so great, that the album is too. Great fun.

Stef, I love your blog. But have you ever thought of putting up some music? I'm on this site called IODA Promonet (www.iodapromonet.com) and I just checked and they actually have Trio 3. You could totally put up a track of them if you wanted.

Anyways, keep up the great work! :)