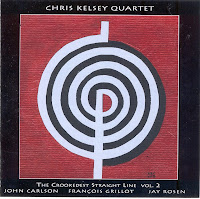 Strangely enough I find this sequel better than the first album, which certainly was also fine. Vol. 1 and Vol. 2 were recorded during the same session with Chris Kelsey on soprano, John Carlson on trumpet, François Grillot on bass and Jay Rosen on drums. The first CD, which was released a year ago, was very much an inside-out thing, with structured compositions and free improvising. I have the impression that some of the freely improvised pieces found their way to the second CD, and that's not bad at all. The CD starts with "61715" which brings an evolution of freely improvised duets between the various band members, joining for short quartet moments and back to duets. It is followed by a slow and bluesy "All Small Not At All", on which the inside theme still generates very agitated soloing by Kelsey, less so by Carlson who remains fairly subdued, but no less intense. "Charming" again brings lots of variation, starting with a clear theme, then moving into free dialogues, even fierce conversational pieces, full of excited chatter between the two horns, and a drum solo by Rosen. "Inside Pout", which starts with a long bass solo, brings the most beautiful composition of the album, very melancholy and sad, and is in stark contrast with "It's Yer Birthday", which is more uptempo and joyful as the title suggests, setting the pace for the last two pieces, equally energetic free bop. Nice!