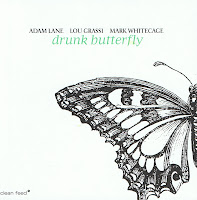 I've just come back from a festival where I saw performances by Charles Lloyd with Jason Moran, Dré Pallemaerts with Bill Carrothers, Pharoah Sanders quartet (actually four musicians playing consecutively, tune after tune!), and I also saw Han Bennink doing an entertaining solo performance for the kids at the festival. Bennink was the most entertaining of all, the rest was mediocre to poor, so in order to get rid of my musical frustration, when I came home I put on this record, which I already heard several times in the past week and which was certain to warm my heart and my bones after the disappointing (and chilly) concert. This is a new trio of three musicians who got lots of releases on the CIMP label and now they play together for the first time on Clean Feed: Lane on bass, Grassi on drums, Whitecage on sax. And it is a winner: warm, melodic and rhythmic. Every tune is composed with a clear theme, but the improvisations can be quite free, and the three Adam Lane tunes are very bluesy. His "Sanctum" is an example in case, with a beautiful tune, vaguely reminiscent of French bass player Henri Texier's take at composition. Mark Whitecage adds three compositions, starting with "Like Nothing Else" and again it is typical for the release, half of his tune consists of arco bass and drums, the sax only joining for the last part. Typical because these musicians play for one another, and for the music in the first place. The album is a delight for its variation and coherence. Variation because the tunes can evoke heartbreaking agony, intense menace, or bring some joyful lightly dancing tunes, even within the same piece, as on "Chichi Rides The Tiger", on which the whole middle piece consists of dark free form, with the main theme lightly touched upon, and then it arises out of the chaos like a beautiful flower. The Grassi compositions are the more boppish, the Lane compositions more bluesy or with world influences, the Whitecage compositions the most abstract, but each track is more than worth listening to, if only for the strong collective performance, the coherence and the emotional expressiveness. Heart-warming and bone-warming music. The jazz of today is often better than the jazz of yesterday. I wish all concert organizers would start understanding that. For those of you living in New York, this band opens the Clean Feed festival starting on September 19. Don't miss it. It will certainly be better than the one I just came from.

Listen to
Last Of The Boppers
Sanctum

Hellou!!
from Argentina
I put on your links in my webs.
In May 5 and 6 begin the 3er edition Free Jazz Festival in Argentina.
I send more information.