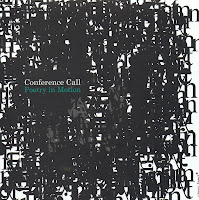 This is Conference Call's second studio release out of a total of five CDs, and it also celebrates the quartet's 10th anniversary, if you allow for the changes in drummers (from Matt Wilson over Han Bennink to George Schuller), and especially "Spirals : The Berlin Concert" is easy to recommend. The band consists of Gebhard Ullmann on reeds, Michael Jefry Stevens on piano, Joe Fonda on bass and George Schuller on drums, four musicians who've played in numerous bands and line-ups, and who clearly feel extremely comfortable together, both as performers and as composers. This CD has two compositions by each band member, except for one by Schuller, and still the music has an incredible unity in its variation. This is free jazz, for sure, but when I first listened to it, I was amazed by their daring mainstream influences (and yes, I find that's courageous at times, it requires openness of mind). "The Path" and "Back To School" for instance start off in a clear mainstream mood, melody and structure, but the musicians' sensitivities and breadth of scope are such that these are just the backbones for wonderful improvisations, which clearly go beyond the mainstream without losing the harmonic basis of the tune. Especially Schuller's "Back To School" brings some fantastic interplay and wonderful free soloing by Ullmann, for a melody which is extremely joyful in an overall sad environment, quite a compositional feat. It is followed by Jefry Stevens' dark and beautiful "Quirky Waltz", on which all four musicians push their instrumental skills to the limits : the bass clarinet is deep and low, alternated with light dancing, the piano haunting, the bass eery, and the percussion functional and sounding at times as glasses and bottles being collected in a bar. And you may expect anything from this band, on the last track "Desert ... Bleue ... East", a calm and free composition moves into the most energetic free environment and then back into bluesy piano notes with a flute sounding from a great distance in the background, and despite all the changes, it still is undoubtebly the same piece. It just illustrates that these four musicians know what music is about : powerful emotional expressiveness combined with musical inventiveness and group interplay. But the centerpiece of the album is Joe Fonda's "Next Step", which brings a repetitive hypnotic African rhythm for bass and drums, offering a great dialogue between piano and sax, that evolves quite brilliantly together with the rhythmic part, ending in an energetic bass solo. Highly recommended.

The album is dedicated to poet Tina Barr.


Listen to
The Shining Star
Poetry In Motion