George Schuller's Circle Wide - Like Before, Somewhat After (Playscape, 2008) **½ 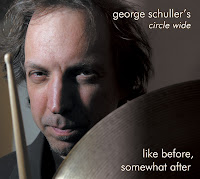 It's a little unfair of me to judge a mainstream jazz album the way I'm going to do it, but well, I can't restrain myself, only because I want to make a few points about music in general. George Schuller is a great drummer and with this album he wants to bring a tribute to Keith Jarrett's American quartet of the 70s and early 80s, which was, also according to me, the pianist's most exciting period (with Dewey Redman, Charlie Haden and Paul Motian). Schuller's band consists of Donny McCaslin on soprano, tenor sax and alto flute, Brad Shepik on guitar, Tom Beckham on vibes, Dave Ambrosio on bass and Jamey Haddad playing percussion on a few tracks, all of them respectable musicians, and especially Shepik is one of my favorite guitar players, with a very broad technique and extreme lyrical fluency in his playing. Apart from two tracks by Schuller ("Dew Point" and "Back To School"), all pieces are Jarrett compositions.

The "Survivors' Suite" is one of my favorite Jarrett albums. The pianist is probably one of the few musicians who come to the same level as John Coltrane in terms of expansiveness of a performance, making it grand, universal, somewhere on another plane than usual music, and "The Survivors' Suite" epitomizes that, bringing music as hypnotic exaltation, a spiritual listening experience. Schuller's band tries its best with the composition, but instead of feeling alone in the universe as when listening to Jarrett, here you find yourself alone in your living room. Again, the music is reduced of its grandeur, and despite the band's efforts on "Part 1", it's only a bleak reproduction. The intro of "Part 2" is still OK, as long as only the bass and vibes are playing, but when sax, guitar and drums join, the whole thing collapses into mediocrity, and it becomes even worse when Shepik distorts his guitar sound (and again, Shepik is a brilliant instrumentalist, but not here!), leading McCaslin on for further complete destruction of the music.

"Encore B", in the Jarrett performance on "Eyes Of The Heart", an underrated album, is a long heartrending wonderfully beautiful and expansive tune, on which Jarrett plays soprano sax and Redman tenor, playing the tune with a powerful expressiveness : listen to the slight time differences between both musicians, the pauzes, the soaring improvisation by Jarrett over a loose rhythm, with a great free bop transition when Redman takes over. And indeed, this tune deserves more attention than it currently has, but the way it's played by this band the music sounds so domesticated, so reined in, reduced to the sequence of notes it is built with, devoid of tension, devoid of its paradox of sad musical joyfulness, ...

So, what's the problem?

One, on a personal note, you (I) know the original compositions so well that you identify with them, knowing them by heart, so any cover of the music is a little bit odd.

Two, in general, it is highly unlikely to bring a successful cover of the best music by the jazz giants. Anyone trying to cover Coltrane's "Love Supreme" is likely to fail, like anyone trying to cover Miles' "Bitches Brew", because the success of these tunes is so linked with the performance that brought it in the first place.

Three, the only way out of this risk, is to bring a cover which is so special, so personal and unique in its approach, that you (I) as a listener can still take something new away from it, or even add new perspectives when listening back to the original afterwards.

Four, and to make matters even worse, is that often covers like the ones on this CD drag these great tunes into the comfort of mainstream. They take out the stings and the claws, the rough edges and mold the music into something more accessible than the original.

Five, the problem is not only Schuller's. His band is fine, and they play well. It's just pointless from the listener's perspective.

Suppose that you copied a Rubens or a Picasso, with your more limited painting skills, as well as more limited artistic vision and personality, why would anyone come and look at your copy if they can see the original for the same price and effort?

The result is that the music, also here, is more old-fashioned than its original. It adds nothing new, it reduces musical wonder to a shallow interpretation, lacking character and inspiration, with no added value to the listener. One can only hope that Schuller's release will lead its listeners back to the original compositions.

The above does of course not apply to all covers, of course. Great compositions by Monk or Ornette Coleman can more easily be covered because the compositions are less intrinsically interwoven with the performance : it's more about the tune than about the playing. You can also have covers that play tribute as an act of just plain fun, think of Greg Bendian's "Mahavishnu Project" or Henry Kaiser and Wadada Leo Smith's Miles albums.