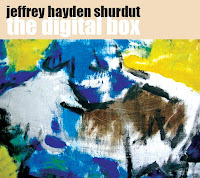 As much as I was pleased with Jeffrey Hayden Shurdut's Williamsburg Sonatas, as much do I have mixed feelings by the digital box with 8 CDs that Ayler Records just released. You get 8 discs with some of today's top free jazz musicians, including Daniel Carter, Blaise Siwula, Sonny Simmons, Adam Lane, Marc Edwards, Luther Thomas, Ras Moshe, ... and these in various line-ups, with Shurdut on guitar, keyboards and guitar amp on all performances. Very often the CD consists of one track of uncompromosing and unrelenting free blowing, with no structure, no rhythm, not even an attempt of melody and sometimes not even interaction, creating a wall of sound which can go on for 45 minutes on several pieces, with all the instruments playing loud, all the time.

The guitarist's approach to music is for him to act as a "receptor for the all-out storm of the world to communicate through". He wants to vibrate along with the noise he hears, in his flat, coming through the doors, from the streets, the neighbours. The quality of the sound is often nog quite good, and the ideas not always very refreshing.

However, there are some exceptions. "Etuning" is certainly one of the best discs in the box, with eight tracks inspired by the bathroom floor, the kitchen sink, wood rattling against the heater, which are also some of the titles. It is fun and contains some great moments. The best CD of the box is "New Text", which has a more gradual build-up, and has some haunting moments, and it also contains a wonderful march-like piece, very dark, very menacing, with crazy but repetitive piano playing by Shurdut, a hypnotic rhythm and mad horns. The great thing here is the variation, which often totally lacks on some of the other CDs, with slower parts alternating with speedier, louder with calmer, chaos with discipline, with or without rhythm, with or without melody, but it works, it's coherent. And the last CD "City Limits" ranks third in my list in this box, probably because the recording quality is again quite good, and possibly because some of the musicians are now accustomed to playing together and especially more familar with Shurdut's approach. It is possibly also not a coincidence that the three best CDs were recorded in 2007, while the others date from 2005 and 2006. And yet, there are some moments when this totally take-no-prisoners-attitude of the first CDs are also enjoyable, but they are definitely not for the faint of heart. The advantage of the box is that you have a broad overview of the musicians' approach and evolution, but a little more selectivity would have helped. Luckily the CDs can also be downloaded separately.