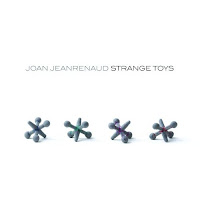 The cello is the ideal instrument for expressing melancholy and sadness, almost by its very nature of being able to play deep and low tones, while the bowing can create long almost weeping sounds, and yet still be able to sustain a full melody. Joan Jeanrenaud certainly is one of today's leading cellists. Her "Strange Toys" brings a strange cocktail of genres and adds a lot of her own creative musical vision. Jeanrenaud was for about twenty years the cellist of the Kronos Quartet, a modern classical string quartet, which was open to any style of music. On this album she takes this a step further, with her own compositions and approach, which is a little more sentimental and romantic. She uses the full emotional power of the instrument while still adding unexpected tones and combination of tones, but always with the same purity of sound. The compositions themselves range in style from repetitive Philip Glass influenced pieces (especially on "Vermont Rules") over minimalist to modern classical, avant-garde and world music, with the center piece "Transition" incorporating them all. The line-up changes with the tracks, with William Skeen and Joanna Blendult on viola da gamba, Alex Kelly on cello, and Paul Dresher on his quadrachord. On the fantastic "Dervish" she is joined by William Winant's marimba which adds wonderful rhythmic counterbalance to the singing cello, dancing together like sufi mystics. Winant plays vibes on "Livre", creating a repetitive almost lullaby pattern of crystal clear bell-like tones, over which the cello wails and weeps in agonizing beauty. At times she barely avoids the trap of falling into "new-agey" mood or soundtrack music, but in general there is sufficient power and variation in the compositions and arrangements to make this more than a worthwhile listen. And those expecting only smooth sadness, will have to look somewhere else.

The only downside of the album is the presence of PC Muñoz who recites a poem on the otherwise nice "Air & Angels" (sorry guys, I can't help it).