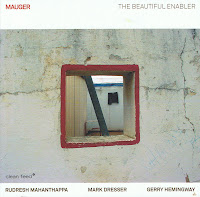 Mauger is a new trio of three musicians who no longer need any introduction : Rudresh Mahanthappa on alto saxophone, Mark Dresser on bass and Gerry Hemingway on drums. Mahanthappa is known for his collaborations with fellow Indian Vijay Iyer, in which complex rhythmic and melodic structures define the often thundering nature of his music. In this trio he shows another side of his playing, more minimalistic, more subdued, calmer and it suits him well. This is of course also the result of the fact that the music is truly a collective creation, with Dresser and Hemingway playing an equally important role, also in the time they get the frontline, which leads to very open music, with lots of space that is not filled in, a big contrast with Mahanthappa's and Iyer's music, which can be quite dense. Each musician composed two tracks and one is a collective effort, yet the focus is clearly on the improvisation itself and the interaction between the musicians, who manage to find each other brilliantly in the music. It is relatively accessible, in the sense that there isn't much dissonance or overblowing, yet the music is adventurous. The title song, "Beautiful Enabler", for instance is typical : a beautiful melody, almost classical in its concept, gets confronted with moments of real musical distress, where arco bass and a crying sax shift moods and then come back in the same effortless movement back to the core theme. "I'll See You When I Get There" is a typical Mahanthappa composition, a little more dark and menacing, with sudden tempo changes and great intensity. "Meddle Music" is the most avant piece, starting with just sounds created by the three instruments, reacting to one another like wild life at the break of day in the jungle, and out of these sounds, about half-way through the piece, grows a hesitating melody, that generates some great polyrhythmic drums support and powerful bursts on the bowed bass. Again a wonderfully rich album, with lots of musical ideas, mood changes, and powerful expressiveness. Highly recommended.

Actually, got this one before your post, and it's great, but you generally help making my accounting a nightmare.

I'm so sorry. I just bought 2 CDs too and downloaded 8 more from eMusic and rented another 8 from the library.

I'd rather die in poverty with good music in my ears and a smile on my face than as a miser who never knew what live was all about :-).

hmmm... let me guess: bachelor?
i still visit your blog from time to time but i gave up checking out most of the high-rated albums because of overkill - not your fault but mine for loving too many genres :-(

My cash also disappears too fast. But I don't regret it. Can't say I collect as much as you do, but maybe in the future ;)

Sorry Luke, wrong guess: married with children ... and I must admit that many labels (luckily the best ones) send me their albums in advance, and that's the great side-effect of my otherwise non-remunerated time investment :-)