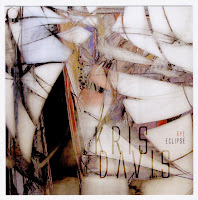 The musical evolution of pianist Kris Davis as a leader is quite remarkable. Her first CD "Lifespan" was nice, still deeply anchored in traditional forms, and a little impressionistic. The second "The Slightest Shift" meant more than a slight move : the compositions became more abstract, the band smaller, the intensity more than a notch higher, but still with clear structural forms and mainstream elements and sentimentality. On "Rye Eclipse", she delves even deeper into the nature of music and sound, and with unbelievable success. The band is the same as on the previous album, with Kris Davis on piano, Tony Malaby on sax, Eivind Opsvik on bass and Jeff Davis on drums, but this band now works as a single instrument. The music seems stripped of all unnecessary ornaments and needless patterns and goes directly to the core of the matter : creating emotional expressiveness and musical explorations that go beyond genres and conventions. The title track undulates between violent energy and sweet tenderness, starting with an odd-metered hammering rhythm, with pounding piano chords, crashing cymbals and pulsing bass over which Malaby does what he does best : scream with passion and utter despair, subduing the rhythmic beast until only tenderness remains, smooth arco bowing, gentle piano notes and sympathetic percussion, which moves back into roaring rage for some minutes only to end again in the most tender of feelings. And this sets the tone of the album : the tune-crafting of her first records has moved into real art, gaining incredible depth and musical value. On the abstract second track, "Wayne Oskar", the piano plays a more dominant role, creating a raw directness in which all impressionist flourishes have disappeared. The third track "Prairie Eyes" is calmer, with a repetitive piano line over which Malaby improvises beautifully. The quartet is the most exploratory in the beautiful "Empty Beehive", in which eery sounds create a magnificent landscape, including buzzing bee evokations by the arco bass and the sax. "Black Tunnel" is the highlight of the album together with the title track : it is varied, again with repetitive hypnotic piano pieces, wonderfully loose drumming, precise and creative bass and sax-playing. At times Satoko Fujii or Vijay Iyer come to mind, because of the physical approach to the instrument, the way the music is at the center of the performance, the cleverness and the adventurous mindset. All four musicians of this band are truly excellent as individual masters of transferring feeling through their instruments, but the biggest achievement is without a doubt the common understanding of the music and how they contribute to generate the same concept even in the most improvised parts. The core of each track is yet always carefully prepared, rhythmically, thematically and structurally, and these by themselves are clever and original, but the way the band brings them makes this album into a great total listening experience. Rich music! Don't miss it.

What a fantastic album! I thank you for posting your review on your blog...otherwise I probably never would have found it. I noticed something quite special, while listening to it for the first two or three times, a couple of sessions later I am sure: Killer album!!! The titletrack is probably one of the best jazz pieces I listened to in a long time. Awesome. Period.