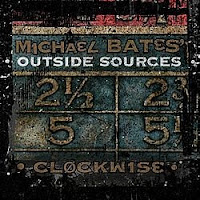 Canadian bass player Michael Bates continues to deliver high quality jazz, with a superb band and wonderfully crafted rhythmic music. The band has slightly changed, with Quinsin Nachoff still on sax, but now with the great Russ Johnson on trumpet and Jeff Davis on drums. The real power of this band, and certainly of Bates' compositions, is that despite the complex compositions and rhythmic layers, which would act as an enormous constraint on many musicians, the whole is still delivered in a very spontaneous mood, with the improvising soloists manoeuvring freely and skill-fully through the set framework. As much inspired by the music of Ornette Coleman as by the great Russian composers of the 20th Century, the compositions manage to convey a wonderful mix of human emotions : joy and sadness, anger and acceptance, in the same piece, and sometimes even at the same moment. The rhythmic oddities can sound like fun, while the sax or trumpet are wailing with sadness. The rhythms change constantly, from 5/4 to 4/4 to 3/4 sometimes in the same track, or sometimes between 4/4 and 3/8, the themes and the structures of the pieces are all set, there are lots of thematic changes and thematic counterpoint, tempo variations, melodic references to traditional jazz, to soundtracks and classical music, and yet it grooves, it swings, it sounds all so natural. But that's all the hardware of the song, the true quality of the album is in the improvisations. In earlier reviews, I have already listed the qualities of trumpeter Johnson : he has an enormous technical skill, while being very emotional in his solos, and on this album, Nachoff plays at the same high level, not to mention Davis and Bates himself, whether pizzi or arco. It is not free jazz, but it's a musical delight from beginning to end. Don't miss it.

Comment on Russ Johnson : I actually never posted my review on him. It contained a combined review of his "Save Big" and Nicolas Masson's "Yellow (A Little Orange)". It's still a draft.