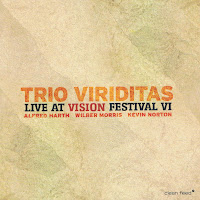 The problem with reviewing all these albums, is that I like good music too much. And when I listen to this one, I think by myself "yes, this is it!", but then asking myself "how does it compare to all the other albums?" and "how can you describe it best in its musical uniqueness?". This is free jazz leaning towards avant-garde, but as bluesy and soulful as it gets, and that's probably one of the most challenging things there is : to create something new, but at the same time to express those well-known feelings in a deeper, warmer, more impactful way. Trio Viriditas consists of German saxophonist/trumpeter Alfred Harth, the late bass-player Wilber Morris and drummer/vibist Kevin Norton. This album is a kind of antithesis of the recent 7000 Oaks recording by 7K Oaks, which is led by Harth, and which has a fierce wall-of-sound approach. This album is as down-tempo and cool as can be, with the three musicians taking their time to weave great interaction, with lots of silence, very subdued, but played with great accuracy and intensity. The limits of the trio is expanded by Norton's vibes - sensitive, sad, moody - and Harth's occasional trumpet playing or even shouting. All tracks are compositions by the trio, except for the last one, "Peace" by Horace Silver, brought in full respect of the pianist. The whole album is a delight of single-minded atmospheric coherence. All compositions stay in the same mood, despite their clear differences and almost limitless improvisational freedom, and if once in a while some rebellious tension erupts, as on "Hiranyagarbha", the tune sinks back into a general feeling of sadness, setting the scene for Wilber Morris's beautiful, slightly Latin "Melancholy". It is a great album, with three wonderful musicians, who interact beautifully and Harth's tone on the sax is superb, so rich and warm. It is as calm, free and subdued as their first album. Again, some great cool free jazz.