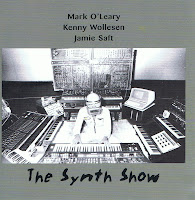 The development of electronics in the 60s and 70s led to some unexpected use in music, including the sudden possibility for instruments such as guitar and piano to lengthen the notes being played, and create long sustain, something which up till then had only been within the realm of horns or bowed string instruments. Changing the tone color and adding additional layers of sound, gave further possibilities to create soundscapes. On this album three modern jazz musicians, Irish guitarist Mark O'Leary and Americans Kenny Wollesen on drums and Jamie Saft on synthesizer, try to fuse the music of those musicians who first explored electronic possibilities in music with more current musical ideas and jazz. Mark O'Leary mentions his admiration for musicians such as Jean-Michel Jarre, Rick Wakeman and Tangerine Dream. But don't let this mislead you : the music on this album is as far away from Jarre's superficial kitsch, Wakeman's self-centered bombast or Tangerine Dream's emptiness as imagineable (as you may notice, this is certainly not my favorite genre!). There are some jazz elements in this music, more in the approach to the instruments than in the music itself : despite all the effects, O'Leary's still brings fast guitar runs with a clear jazz tonal progression and Wollesen's drumming is, even when fixed rhythms are rare, typical for jazz. The rest of the music is "beyond there", in the spheres, with high-toned, long phrases, odd noises coming and going. They also keep away from identifiable tunes : the full focus resides with the possibilities of the instruments to create soundscapes together, but then in a structured way. The longest track "Sky Kirk" clearly illustrates this, even ending with some boppish space ending. "Texas" is more reminiscent of Jan Hammer's fusion-like approach, with the synth also taking care of a punctuated and percussive bass line, over which the guitar can play high-toned solos, and Wollesen shows himself a rhythmic master on this tune, restrained, jazzy and with an inherent funkiness. But what really makes this music totally different from its pretentious original space-rock pioneers, are the elements of improvisation, the obvious fun and even at times lightheartedness. It must be clear that the album is a tribute to the pioneers of electronic music, starting with Ron Grainer's Dr. Who Theme dating from 1963 (but here closing the album), with a piece called "Oxygen" as a reference to Jarre's best-known record. Yet regardless of the references, these three musicians clearly manage to lift this exercise in style a little higher and beyond just imitation or even modernization, they add a lot more, making it a real personal voyage into the electronic past, and well, a little bit in outer space too.