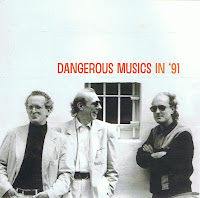 Now that we're talking about trumpet trios, and times long gone, here is a great release of a tape-recorded performance by Dangerous Musics, a British band with varying line-ups, here consisting of Jon Corbett on trumpet, Nick Stephens on bass and Roger Turner on percussion. Their music is all about nervous sound, intense interaction and joint creative destruction. Don't look for themes, melody or rhythm, don't look for solos in the traditional sense, but enjoy the bursts of notes, shrieks, wails, crashes, kicks, agitated plucks ... in short, the kind of music that some will not call music. But it is, and very much so, although with a total disregard for conventions and tradition. It is violent at times, but also subtle, sometimes even emotional, with an unbelievable immediacy and playing "in the moment". The five first tracks were recorded on a cassette in Roger's flat in London. The long last track was recorded live on cassette too, at an unknown venue by an unknown person in an unknown year, and the possibilities offered by its length make it even better than the other pieces, with Corbett switching to flute, and the rhythm section moves into a powerful thundering mode which was totally absent at the beginning of the record. Don't be too concerned about the fact that the music was originally recorded on cassettes: the sound has been digitally remastered and now brought back to life, for today's audiences, who, I hope, have grown into vast multitudes ... with open minds and open ears.

You can order from Loose Torque.