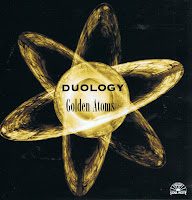 This is only the second (third?) clarinet-trumpet duet that I can remember, next to John Carter's and Bobby Bradford's "Tandem 1" and "Tandem 2". Of course there is also Anthony Braxton's "Duets" with Taylor Ho Bynum, but then on sax and cornet, which is also a rare combination. Duology is Michael Marcus on Bb clarinet and Ted Daniel on trumpet, two musicians with a great track record. However unusual, the format deserves attention, because of its possibilities for almost abstract purity and intimate conversations. That's at least what both men do here. Like atoms, they're circling around a musical nucleus, in ellipses in the same sphere, sometimes in sync, sometimes almost in collision. Some parts are clearly composed with great unison themes, but most of it isn't, and the most extraordinary thing about the album, next to the strong musicianship of both artists, is the unbelievable speed at which they react to one another. The fun thing is their exploration of musical form, in terms of scales and rhythms, themes and structures, but all this in an unpresumptuous simplicity which hides lots of underlying complexities. But for the listener, these are irrelevant, it's the overall end result that counts. And although it sounds a little distant at times, it is more than just an intellectual journey into music, it remains first and foremost an emotional listening experience.

you just forgot to mention names of the musicians:

Thanks! What an oversight ... it's amended now.
Cheers
stef