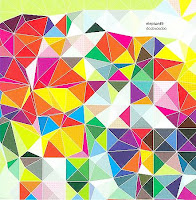 Now that we're in the mood for something else, here is another interesting album: Elephant9 with Dodovoodoo, the brainchild of Norwegian jazzers and rockers Ståle Storløkken (Supersilent, Humcrush) on keyboards, Nikolai Eilertsen (The National ... Full DescriptionBank) on guitar and bass, and Torstein Lofthus (Shining), on drums. On many of his other albums, Storløkken has a tendency to get totally sucked up into electronics, but here it's the real thing : hammond organ, fender rhodes, synthesizer, and with a rhythm section that just does not stop. It starts with high tempo and the tempo hardly ever relaxes for the whole album, with the exception of "Hymne", which is played on church organ and is as slow and solemn as it gets. But that's just a very temporary slowdown, then the whole machine gets back at full speed for the rest of the tracks. It is also very 60s or early 70s because of the instruments used, but none of those early fusion bands had half the energy of these guys. Two of the tunes are Joe Zawinul originals ("Doctor Honoris Causa" and "Directions"), and musically there are references to Weather Report, but also to MMW and Miles, but those are just superficial. This band is not copying or playing covers. What they bring is highly original and energetic. Great stuff.

Just a little correction:
It's Elephant9, not Elephant 9.
And Dodovoodoo, not Dodo Voodoo.
And Rune Grammofon, not Rune Grammophon.

thanks Stef...I have been listening a lot to the great WR live in Tokyo lately..which of course got me back to the live Miles things of the same era. Elephant9 has that spirit and drive.

Now to find a trumpet player in Chicago...