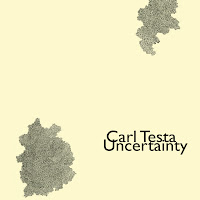 Here is an interesting and unusual record. The backbone of the record, and the one which should provide its unity, are the three clarinets, which on most tracks play very minimalistic, almost monotonous abstract melodies, often in counterpoint and unison alternating. The concept is relatively well-chosen, and creates a kind of eery feeling when listening to it at one stretch. The variation comes with the role of the electronics and percussion, now sparse, then violent, as on "Divergence", creating a clear conflict in style, but fully coherent with the overall feel. The contrast goes too far with the uptempo "Impetus" on which suddenly a tenor is brought forward, a pulsing bass and a rhythmically pounding drums. The longest track, "A Little While", is to be found on the other side of the spectrum, fully improvised, or so it seems, and again hurting the overall focus a little, because there is no identifiable structure or melody, in great contrast to all the other tracks, on which the music is generally slow, gentle and melodic. There surely are moments when Braxton comes to mind, or Chris Speed, or even the modern classical minimalists. The effort is a good one, the uncertainty concept is also very clear, as most of the music sounds like a question mark, moving forward hesitantly, despite the precise compositions. This may be a weird comment, but the album would have benefited from less variation. If the free improv and the jazz piece had not been there, the overall effect would have been stronger. Yet in any case, a worthwhile debut album.

The band consists of Carl Testa on bass, bass clarinet, and electronics; James Antonucci on clarinet and tenor saxophone, Bill Carbone on percussion and Gergely Kiss on clarinet.