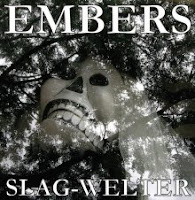 At first hearing, I liked the uncompromising intensity of this Australian band. At second hearing, it all sounded bland and not very creative. At third hearing, it sounded stale. Often, with other albums, it is the opposite, the more you listen, the better it gets. The band consists of Adam Simmons on saxophones, Dave Brown on bass, Sean Baxter on drums and Kris Wanders on tenor saxophone. They mix influences from free improv (Globe Unity Orchestra) to heavy metal (AC/DC), creating some free noise kind of music. It sounds free, it is noisy, and it must (at moments) be fun to play, for sure, but not to listen to, not a fourth time. It is superficial and puerile stuff. But the latter makes it also uncompromising, which is an asset. Maybe, if they start thinking in terms of making music to channel their rebellious anger instead of just demonstrating it, they might get somewhere.

I liked the embers albumn