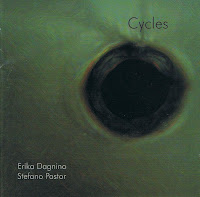 Hallelujah!! At least one brilliant mind has understood the best relationship between poetry and music. And that person is Stefano Pastor, an Italian violinist who composes and improvises based on the specifically written poetry of Erika Dagnino. The album is hence titled and subtitled as "Cycles, for interior voice, musical instruments and objects". Meaning that each piece is based on a poem, but without any recitation of poetry. And that's the good news : there is just violin and percussion to be heard. The percussion is played by Maurizio Borgia on the first track, and by Pastor himself in overdub on all the three other pieces. Erika Dagnino not only wrote the poems, but her input has also been instrumental in shaping the overall sound of the music in preparatory discussions with the musicians. This album is remarkable in many ways. First, Pastor's violin sounds like you've never heard a violin before (at least not this guy). The sound is so full, it has so much voice and depth, and even breath, that it sounds at times like a reed instrument. Second, apart from the unusual sound, Pastor's playing is excellent, composed and improvised at the same time, providing a good balance between structure and emotion. Third, the pieces are of an immediate simplicity, not as in "simple", but as in "less is more", almost in a zen-like fashion, a feeling which is reinforced by the sparse accentuating percussion. This leads to a certain monotony too, that - depending on your listening attitude - can be considered a strong or a weak point. Fourth, despite the avant-garde feel of it all, the music remains lyrical and melodic, in direct reference to the poetry, which can be described as avant-garde too, offering an interesting mixture of physical reality, dreamlike perceptions and abstract notions. The only problem, and it's a minor one, is how to read the poetry while listening to the music and vice versa. Concentrating on both at the same time is impossible. I think it's best to listen first, then read the poetry, and then listen to the music again. Since synchronicity is not possible, the relationship between the music and the text can at best be vague and indirect. Yet that's irrelevant. The overall concept and execution are a great match.

As a side note: Anthony Barnett writes in the liner notes : "No poetry and jazz here, thank the gods. And I ask you. Just how often has that ever worked? Mingus’s “Freedom”, ok. But the poets, almost always no. And I say this as the author myself of Poem About Music, twice performed with exceptional musicians: interesting but failings. Why? Because, ultimately, there can only be writing round about music. Yet Dagnino’s writing is here too, equally".