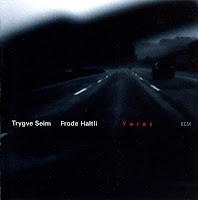 ECM at its worse, is when Manfred Eicher acts like a lion tamer, levelling out any sound that may be considered wild or shocking or abrasive, domesticating the natural wildness of some musicians into his self-conceived musical straight-jacket. ECM at its best, is in the intimate musical moments of small ensemble settings. Think of Anouar Brahem, Jarrett, Egberto Gismonti, Jan Garbarek, ... creative angles, virtuoso musicianship, accessible, gentle, emotional, impeccable sound quality, ... and this album perfectly fits in that category. Norwegians Trygve Seim on sax and Frode Haltli on accordion bring ten duo pieces of intimate reveries. The music is calm, subtle, with both musicians using the full range of their instruments, but functionally. Seim's tone is warm and clear, he can bend notes as if it was possible to play glissandos on a sax, turning his instrument almost into an Armenian duduk. Haltli can extract sounds from his accordion which are broad and rich. Most of the compositions are relatively abstract, but on some they fall back on more traditional formats, as on "Waits For Waltz", Bob Marley's "Redemption Song", or "Yeraz", the title track which is an Armenian traditional, here played in the most heart-rending way imaginable, played with the same sentimental melancholy edge as the original folk song. Some tracks, as "Bhavana" already figured on Seim's first ECM CD "Different Rivers", although they have their place here too. The most beautiful piece is the first one, a long suite-like composition, with elements of the Greek-Armenian philosopher G.I. Gurdjieff and Seim's, with the accordion sounding like a droning harmonium on the background. Conceptually it could be Garbarek, but the tone is warm, not bone-chillingly icy. "Yeraz" is an Armenian word which could mean "people without a place", and here in the positive sense : two Scandinavians with a warm heart and wonderful musical skills, and with the world as their place, here with the perspective of the Caucasus mountains.

"A gentleman is a man who knows how to play the accordion, but doesn't".