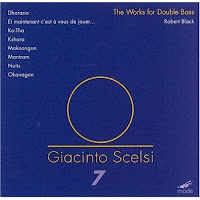 Italian classical composer Giacinto Scelsi (or "a horizontal line beneath a circle"), who died 20 years ago, was one of the pioneers who moved Western music into microtonal environments, exploring the nature of sound itself and pitch. One of his ideas was to bring to life the "whole universes that exist within these sounds". For the first time his works for double bass have been compiled into one album, giving the music an even more direct focus than usually. On some of the tracks only one note is played by the bass, but then in a huge variety of approaches, with different attacks, requiring the musician to use lots of extended techniques, making the single note sound different each time. And it is not boring. Yet I must admit that when the cello joins on "Dharana", the variation felt welcome in my ears, despite the fact that they stick to the one tone approach, but adding more layers, creating a richer texture with the two instruments bowing along. The work is played by Robert Black, bassist of the "Bang On A Can All-Stars", and assisted on cello by Felix Fan on one piece, on bass by John Eckhart on three tracks (my favorites), and by June Han on harp and Tom Kolor on tam-tam on one track. Bizarrely enough, on one track Black starts "vocalizing" too, short almost shouts which hold the middle between orgasm and torture. This is one of those pieces of music which is beyond categorization. In its detailed notation and programmatic approach it certainly is classical music, but the boundary-shifting thinking, the unconventional sounds and the room for improvisation, together with the plucking of the bass, surely makes it avant-garde, but will certainly also please modern jazz afficionados. The last track, "Mantram" is the most melodic, with references to Indian classical music. The overall effect is stunning though, with lots of emotional power, ranging from joy to gloomy atmospheric pieces, with lots of hauntingly mesmerizing passages.

Let's be honest. This is a very poor interpretation of these pieces by these bassists. Imagination and technique are very lacking here. Very sad.

Are there any performances of these pieces that you would recommend?

Be constructive, please.
Thanks
stef

Some pieces were brought by Joelle Leandre before. IMHO there's sometimes too much Leandre and not enough Scelsi in her interpretations.