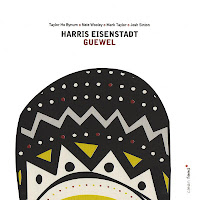 Guewel or N'Guewel means as much as "griot" in the Wolof language of West-Africa, a wandering musician or poet, a living repository of the oral tradition but also someone who is free to comment on society and who incorporates current events in his songs, integrating them in the already existing and generally known stories. Canadian drummer Harris Eisenstadt went to Senegal and Gambia to study griot music and rhythms. He now integrated some of this into this wonderful free jazz record, assisted by a four horn section consisting of Josh Sinton on baritone sax, Mark Taylor on French horn, Nate Wooley on trumpet and Taylor Ho Bynum on cornet. The great thing about Eisenstadt's approach is that he gives the musicians plenty of room to play around with the rhythms and the themes. The first track starts in a total free mode, with an initial hint of a unison rhythmic theme, but the band goes on like birds singing together, or or pedlars shouting on a market place: it's the same idiom, but it sounds chaotic, but then the drums lead them back for a wonderfully compelling theme, which drops away for a few minutes of drums/french horn duet, and when the theme returns, the music is full-fledged African, joyful, polyrhythmic, expansive. The second track starts with solo percussion intro, the band joins in a contrapuntal halting rhythm, with again, somewhere in the middle, a great half-march-half-waltz-half-latin-like theme emerges (I know it doesn't add up, but here it actually does!), offering the trumpet the solo spot, while the other horns disappear into the background, succeeded later by the cornet. Strangely enough, the same structural formula is also used on the following track, rhythm and musical chaos evolve toward a great jubilant theme somewhat halfway the piece, again with the horn section playing in full counterpoint, then collapsing again into some kind of communal chatter evolving into a slow solemn melody. The four horns are a perfect fit for each other, managing to convey joy and sorrow, magic and mystery almost on command, with the biggest kudos going to Eisenstadt for his crystal clear drumming. He is not all over the place, he is there where he needs to be, driving the music, not only providing the rhythmic base, but also lots of the listening fun, giving the right touches, underscoring during improvisations, supporting the soloists, yet challenging them at the same time. His greatest feat are the compositions though. The melodies are superb, the rhythms complex and evolving the whole time, but also the structure of the tunes, with each piece being a canvas of ever-changing colors and sentiments, with tightly composed and arranged themes interspersed with either chaotic chatter and percussion plus solo moments. It gives the effect of the individual moving out into the inhospitable outside world, encountering lots of unpleasant experiences, only to be sucked up again into the welcoming bossom of the community, where safety resides. All conjecture on my part, but that's how it feels. And I find it's absolutely fabulous. Don't miss it.

Interesting that Eisenstadt likes to surround himself with horns -- wasn't it his CIMP album that had three trumpets on it?

Anyway, I'll have to check out Guewel. Sounds like good stuff.

Haven't gotten to this one yet,but other than the Braxton/Morris box,the best Clean Feed album I've heard this year is "Live at Vision Festival VI" by Trio Viriditas.It is a masterpiece.