Rob Mazurek is a musician of many styles, from jazz to rock over noise and avant-garde. On this album, he plays solo cornet, in the French abbey of Fontevraud, while in residence there for a multimedia art project. His performance echoes with the size and solemnity of its religious surroundings, with lots of echo and reverb in the tone. The improvisations are exercises in sound, rather than in melody or rhythm, and the beauty of it is overwhelming. Unlike many of Mazurek's other albums, the experimental aspect is not the main objective here and it is hence almost absent, although the music is far away from mainstream music. Not all the tracks are solo in the truest sense. On one, he's accompanied by singing birds, on another on piano (the inside of it, creating chimelike sounds). The last track starts with trumpet, followed by five minutes of silence, then ambient voices, presumably from tourists visiting the abbey, and a drone-like sound, some piano. The work is dedicated to the founder of the monastery, Robert d'Arbrissel, who is probably as unknown to you as he is to me. From reading his biography on Wikipedia, he was the type of person who went against the grain, as does Mazurek himself, though on another plane of course. At least the ascetism and the emotional nakedness of the music fit well. There aren't that many solo trumpet albums, but this one is certainly among the best.

The record contains a 16 pages booklet with pictures of the recording session, paintings and a poem by Rob Mazurek (I cannot comment on these, since I only downloaded the album). 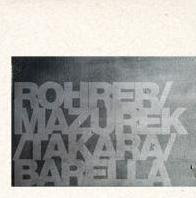 This quartet finds Mazurek again in a fully experimental electronic environment, finding back Maurizio Takara, percussionist and electronics expert, and fellow member of São Paulo Underground. They are joined by Thomas Rohrer on rabeca and sax, and by Miguel Barella on guitar and electronics. The record consists of two long tracks (over 45 minutes each) and a short one, in which the quartet creates a long exploration of sound, with subtle shifts away from silence, through noise, through electronics, with once in a while the trumpet soaring above it, at other moments drums pound mercilessly, or the guitar screams, but that is rare, most of the time the music is faint, reminiscent of Keith Rowe (although not going that far into meaninglessness). It is a worthwhile adventure. 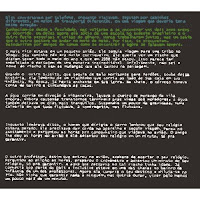 The sophomore effort of this Brazilian band featuring Mazurek, further consisting of Mauricio Takara and Guilherme Granado on percussion and electronics, Richard "Hollywood" Ribiero on percussion, and Fernando Sanches as the audio mixer ... Electronics, noise and distorted trumpet, and processed percussion and some regular percussion. There are faint melodies, Tortoise-like, nice and friendly in an otherwise agonizingly hostile environment. There are lots of rhythms and sampled ambient sounds, and lots of noise. Not really my cup of tea.