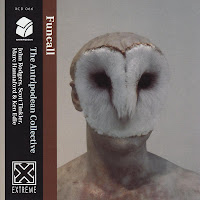 This is the second album by the Australian free improv/free jazz band The Antripodean Collective, released within the same year as their first, "The Massacre Of The Egos". In this "ever-changing" collective, Scott Tinkler remains on trumpet, as does John Rodgers on violin and Ken Edie on drums, with Mark Hannaford replacing Paul Grabowsky on piano and there is no bass anymore. This album is a little less intense than the first, on which there was a clear common drive, and it shifts away from jazz into even more avant-garde territory. Especially the absense of the bass leads to that effect. Despite being fully improvised, the music has a strong sense of composition and structure, which testifies of the musicians' listening skills and coherence of approach. Most of the tunes are abstract, with the kind of lightness and gentle exploration that makes it interesting to listen to. They give each other also lots of space and openness, and with the addition that most of the times the instruments are played "straight", with not too many uses of extended techniques, the overall effect is still one of relative accessibility. Despite that, the sound is quite cold and cerebral, with often halting rhythms, as if the band is trying to gain momentum, yet never reaching that stage, quite on the contrary, as if they're forced to re-invent the piece with each new note being played, creating eery soundscapes through subtle interactions. Their first album, the "Massacre Of The Egos", had a little more emotional depth and variation than this one. 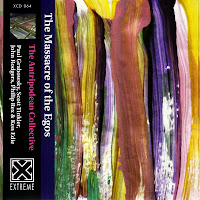 So, I add this now, let me try to explain why I prefer the first album. True, Philip Rex plays bass here, adding some warm sounds to the high tones of the trumpet and the violin. But that's not the only reason why this album has more spirit, more soul ... The attitude, the intensity, the drive are different, more poignant, more urgent, with a clear and absolute desire among all musicians to tell a story, urging each other on to listen-to-what-I-have-to-tell, listen-to-what-I-have-to-add, and enjoying the interaction of storylines, which in the end becomes really one story. The sophomore album has less of this urgency, with the musicians almost challenging each other to come forward with a story, as if they're unwilling to do that spontaneously, as if they might have something to tell, but without daring to. Well, that's a difference in attitude which makes a world of difference for the music, and hence also to the listener. The "Massacre Of The Egos" is much denser, with lots of overlapping sounds, sounding a little more chaotic at times, but it is so much more human.