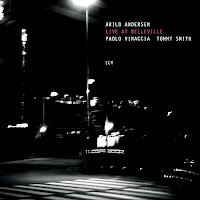 Should you buy a record for two tracks only? Or better, just buy two tracks of the album if you can download them (soon on iTunes). Usually I like and judge albums in their entirety, yet that's not always possible. This album has two stunning highlights. One is called "Independence 2", an eleven minute track of rhythmic and musical delight, and the other one "Outhouse", a ten minute power piece, full of surprising full force subtleties. The protagonists are Norwegian super bass-player Arild Andersen, Norway-based Italian drummer Paolo Vinaccia (with whom he released several albums) and Scottish tenor saxophonist Tommy Smith. Five of the seven tracks are slow, or typically ECM-like : nice, somewhat new agey, non-comittal and well-played. But the other two tracks referred to above, are absolutely stunning. The three musicians create a powerful drive, shining all three, integrating a very fusion-oriented approach at times (everything fusion would like to be but never achieved), creating pure fury, high speed improvisation, with brilliant solos, and even more breath-taking interactions. I am not sure what I should be more astonished about : Smith's unbelievable soloing (I must admit, I did not know him, but what a sax-player), Andersen's incredible precision and creativity as a bass-player (no surprise here, we know what he's capable of), Vinaccia's drumming, which is beyond belief at moments, he is hard-hitting, yet full of surprises and subtlety, or the superb interaction between all three. So, uninteresting and mellow at moments (and not for me, thank you), brilliant at others.