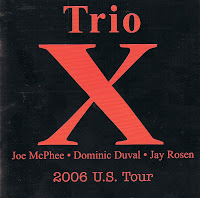 Beware! Trio X is one of my favorite bands, so read my review with that knowledge in mind. Trio X is Joe McPhee on sax and pocket trumpet, Dominic Duval on bass and Jay Rosen on drums. All three are among the best musicians in free jazz land. Trio X is the epitome of tradition-based free jazz. It is free improvisation, with the themes of some standards or spirituals, often, but not always, as an excuse for improvising, being touched upon sketchily. The "2006 U.S. Tour" is a 7-CD box with a 32-page booklet, with the performances given between October 2, 2006 and October 9, 2006. Those of you who already have Trio X albums may find some redundancy in the material, because Trio X plays many of their classics : "Motherless Child", "Blue Monk", "A Valentine Fog Of War", "Going Home", "God Bless The Child", "Evidence", but that does not really matter to me. The pieces are never the same, the sensitivity, the beauty, the subtlety, the interplay, the reverence, the solemnity, the spirituality, the intimacy, the creativity, the depth, the beauty, the beauty, the beauty, ... are to be enjoyed on each track, on each of the CDs, over and over again. And some of the pieces are played at several of the evenings, but they're never the same, and the length of the same piece can vary between five minutes to thirteen, played on tenor or soprano, played inside or outside. There are also some new pieces. On "A Waltz For Susan", McPhee gets in the same circular breathing rhythm as some of the waltzes on other albums, but here he sings while playing his sax, quite a feat, quite unusual yet it sounds great. "Colgate U" is a Jay Rosen drum solo at Colgate University, "We Do" is a Dominic Duval solo, on "The Song The Robin Sings", a slow tempo bopper, McPhee switches between pocket trumpet and tenor, and the tune is actually referencing "Stella By Starlight" in an abstract form. The same kind of abstraction takes place on "In Evidence", based on Monk's "Evidence", yet approached differently, ending in absolute raw and fierce blowing, with the lengthy Detroit version without a doubt the best one. McPhee's tribute to Dewey Redman, "Bringing It", is also great : free and wild, with sensitive bass at the beginning, evolving into ferocious emotional blowing with powerful (and subtle!) rhythmic support. And on the Detroit performance, "The Song A Robin Sings" is also the best version of the lot, with McPhee's trumpet playing at moments reminding me of some typical Lester Bowie inflections. Great stuff. And the sound quality is absolutely excellent, with enthusiastic and respectful audiences. I am a Trio X fan, but I can tell you : the box is worth its money.

However, despite the box's length, it does not contain a version of "Lonely Woman". Therefore a small addendum on the following album ....

Recorded some 7 months earlier in Vilnius, Lithuania, this double LP was released by a new Lithuanian modern jazz label. I haven't listened to it yet (actually I don't have it), but part of the music was already on the DVD released earlier this year. The great thing is that they play Ornette Coleman's "Lonely Woman" and "Law Years". But why an LP? What can I do with an LP?