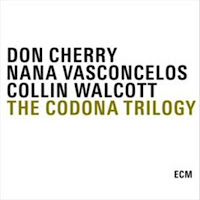 Codona is one of those truly unique bands that made music in total disregard of style, fashion or commercial interest, fusing elements from all over the world, Africa, India, Japan, Europe, North and South America into one sublime melting pot of beauty and musical joy. The band consists of Colin Walcott on sitar and tabla, Don Cherry on trumpet, flutes, melodica, doussn' gouni, and Nana Vasconcelos on percussion and berimbau.

Now, their trilogy has been re-issued by ECM as one set, in its entirety, which is great for those of you who might be interested. And you should. Here is why.

1. Don Cherry may not be the greatest trumpeter of jazz history, but he is for sure a musician in the truest sense, someone who makes music (as opposed to someone who just plays an instrument). Even more, he takes his music to a higher spiritual plane, one of joy, one of global unity, one of world peace, but not in a shallow, bland way, but with lots of depth. Throughout his all too short life, he kept looking for new forms, joined every band or musician who was interested in playing music together. Member of the famous Ornette Coleman Quartet, member of Old & New Dreams, guest musician on so many other albums. He died too soon in 1995.

2. Collin Walcott is the spiritual person in the band, one of the few non-Indians who truly masters the sitar, having had Ravi Shankar as a teacher, but he plays it in a very western style. Founding member of Oregon. He died all too soon in 1984.

3. Nana Vasconcelos from Brazil, is a master of percussion, but also someone with great musical vision. He is someone who went miles beyond Latin rhythms, beyond musical genres and styles, carving out his own special place in modern music.

Together, these three musicians brought a kind of music that no one had ever heard before and that no one has heard since. The music is rich, intimate, resourceful, composed, spiritual and free.

Whether this band plays Ornette Coleman covers such as "Race Face" or "Drip Dry", or African traditionals, such as "Godumaduma", or Japanese such as "Goshakabuchi", the musical surprise, the wonder of small things, the pleasure of playing, the simplicity of the trio, it is all there : soaring trumpets, extatic shouting, dramatic percussion, disciplined rhythms, and joy, joy, joy.

"Like That Of Sky", the long opener of the first album, is an incredibly new-agey tune, with Cherry's bamboo flute in a leading role at the beginning, sounding like music coming straight out of the jungle. Then the sitar and Vasconcelos Brazilian percussion join, Cherry switches to bell-clear trumpet, then back to flute, with dubbed background voices, with the tempo increasing during the piece, and Cherry's flute-playing is just again out there, full of joy, spirituality, soaring, singing, jubilating, dancing over the percussion and sitar.

Or listen to "Mumakata", a real song, sung by all three musicians, over an African rhythm, again a rhythmic joy from beginning to end, with the trumpet sounds flying high in the sky, making even the birds feel jealous.

Another absolute highlight is "Malinye", which is a kind of suite, starting with Cherry on melodica, playing a beautiful melody on this unusual instrument, with Vasconcelos' rumbling percussion joining, and Cherry singing the African traditional, then Walcott joins, but when Cherry switches to trumpet, the skies tear open, clouds disappear, the sun starts shining, every person hearing this tune stops in his tracks, thinking "what is this?", and true, it is the most uplifting tune you and anyone else have ever heard in the history of mankind.

Or listen to the short "Walking On Eggs" a Walcott composition, which is so jazzy, so rhythmically enjoyable, that by itself it is worth the purchase of the whole trilogy.

The music at moments sounds naive, but then in a high quality form, full of child-like wonder and good intentions, yet the wealth of musical baggage these musicians bring is staggering, from traditional blues (Cherry's "Clickety Clack"), to more avant-garde pieces ("Trayra Boila") or even minimalist repetitive ("New Light"), or plain jazz, it is fun, it is pure, it is essential, lifting the music well above the naive (and often boring) simplicity of so much new age or world music. This music is artistically relevant.

It does not fit into any category. It is unique music. Because of that it did not influence musical history at all. I do not think that any other group of musicians would have been able to even copy Codona. Yet it is absolute essential music. Regardless of musical preference.

Maybe with the exception of some other albums by Don Cherry, there is not much music which brings this level of simple pure spiritual joy, rich and deep at the same time. It is zen, it is tribal. It has an earthly feel, with deep roots, yet it is music of the skies too. All in one.

Listen and download from iTunes for only 17.99 euro. But I would recommend you buy it in hard copy.

when i first heard about codona, and see the components, trumpet, sitar, percussion, etc. i never thought would blow my mind like actually does, i'm just an avant-garde guy, and not a total free jazz or experimental stuff listener, but this is superb. One of the most revealing music i ever heard.