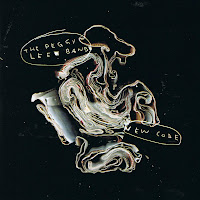 True, this isn't exactly free jazz, quite on the contrary, it's very much composed and arranged, with the exception of three fully improvised tracks. Canadian cello player Peggy Lee feels as comfortable in an avant-garde environment as in a more traditional context, and on this album she mixes both, creating an interesting and quite enjoyable synthesis. The overall sound of the album is a continuation of what other musicians like Bill Frissell or Michael Blake started, jazzy rock sounds, carefully arranged, but instead of having the anger of rock, the whole thing is enveloped in a blanket of warmth, even on tracks like "Not A Wake-up Call", on which the electric guitar goes haywire. The band consists of Ron Samworth and Tony Wilson on guitar, Brad Turner on trumpet, Jon Bentley on tenor, Jeremy Berkman on trombone, Peggy Lee on cello, André Lachance on bass and Dylan van der Schyff on drums, a complete Canadian band if you want. The melodies are beautiful, down-tempo, with layers of sound building up gradually, with the musicians playing soft improvisations over a fixed structure, but all very subdued, with the horns muted, and the guitars gently plucking the chords.

Yet the antidote to so much sweetness is given at the same time. One of the most beautiful improvisations is the duet between cello and trumpet, and the following track, "Scribble Town" moves into real avant-garde, with guitars and cello making pointillistic dissonant sounds in the foreground, over a pre-arranged rhythmic horn section, while the rhythm sections goes berserk in the background, offering a wonderful opportunity for the sax to give a great solo over the total confusion. After so much madness, "Tug", brings us back into nicely arranged and homely music, with an interesting counterpoint structure, and a great trumpet solo. The album starts and ends with two covers : Bob Dylan's "All I Really Want To Do" and Kurt Weil's "Lost In The Stars" respectively. Peggy Lee surely created her own genre with this album, and I hope that listeners will have a sufficiently open mind to accept the often contradictory musical statements, that shift between smooth and sensitive music to harsh adventures, ending I Weil's fearlessly sentimental piece. Whatever route she chooses, the musicianship of her band and their coherent approach bring the endeavor to a great end.

Anything by The Peggy Lee Band is well worth checking out. She has several CDs on SPOOL. My favorite of the band is "Sounds From The Big House".

Also her duet CD with Dylan Van Der Schyff, "These Are Our Shoes", is terrific. Yes, it is drums and cello in duet.