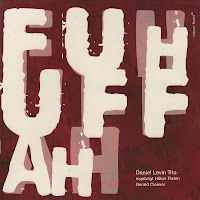 The cello trio in jazz is an unusual line-up. Recently Erik Friedlander released his Broken Arm Trio album with cello-bass-drums, and before him Fred Lonberg-Holm and David Eyges come to mind. Now David Levin has done the same, and quite well even. The album does not have the great atmospheric feel of his "Blurry", going for a more direct, raw approach, but assisted with two stellar band-members Ingebrigt Haker Flaten on bass and Gerald Cleaver on drums. On the album the compositions vary between real jazzy tunes, with a strong rhythmic backbone to more modern work-outs. In stark contrast with his previous albums is the nervousness, the drive, a little more tormented, or even hypnotic and eery at moments, but always rough and moving on, with the title song already setting the stage from the very beginning. The second track "Shape" is built around some odd rhythmic patterns. The traditional, "Hangman", is absolutely brilliant and dark, starting with the melodic tune played by cello and bass played with arco, and evolving into eery soundscapes. For the following tracks, I am not too sure what happens, but I loose attention. It might be that I'm tired, but it may also be that the trio reaches a limit of possibilities. But it ends well again, with "Wood", a great kind of rubbing shoulders between cello and bass, sounding like lovesick whales courting one another. And once you're fully into this weird intimacy, all hell breaks loose again, with the last track, "Wiggle", on which the trio unleashes its true jazz power by bringing a long high tempo tribute to Jimmy Lyons. The cello trio has of course its limitations. The lack of vocal power of the cello next to bass and drums makes it a hard task to keep the same drive at with a tenor leading the tracks, but nevertheless, this trio really manages to play some great stuff, even if not all the tracks are of the same high level.

Watch a recent performance by the trio (relatively calm compared to the CD).