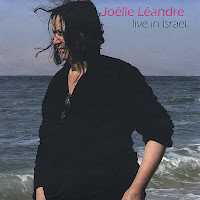 Joëlle Léandre is the great lady of the bass, totally rich in ideas, open to new things and new collaborations and totally uncompromising. Always looking for new things, new forms of expression. This record is in its breadth a worthwhile addition to her long discography. It was recorded in November 2007, catching her performance with several line-ups of Israeli musicians.

It starts with seven improvised pieces for solo bass. To me, this is by far the best part of the record, because Léandre demonstrates her great skill at creating wonderful, beautiful, heart-rending sounds out of her instrument, especially when played with the bow. It has an unusual combination of purity, depth, substance, warmth and volume. The improvisations are timeless, universal, beyond musical categories, varying from lyrical explorations, over jazzy moments to plain avant-garde.

On the second CD are four sextet improvisations with Assif Tsahar and Albert Beger on tenor sax, Ariel Shibolet on soprano, Haggai Fershtman on drums, Daniel Sarid on piano. There are some nice moments, but also some chaotic ones, with sometimes a little sense of direction missing.

These are followed by four trio improvisations with JC Jones on bass and Steve Horenstein on sax, and I must say that I am impressed by these two double basses interacting, and especially by Horenstein's perfect match for it. The basses lead and the sax adds color. Léandre sings on one of the tracks (instead of her usual shouting as on some other tracks), again creating a musical environment which is totally out there and highly uncommon, but again again, she does her thing, and it works.

The rich and varied record ends with duo improvisations with Sameer Makhoul on oud and vocals. This is again a highlight of the album, with Léandre also working perfectly in a supporting role for Makhoul's subtle and sad playing. Then she joins his sad singing, wordless and equally sad, adding some drama, while playing arco at the same time. The last track is superb, because Léandre turns this traditional music into a more adventurous space, and the oud follows suit, improvising and interacting as if they'd played together forever.

Not everything works well on this album, but it has some truly great moments.