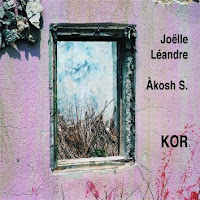 Talking about substance, this album has more than plenty. Both musicians, Joëlle Léandre on bass and Ákosh Szelevényi on sax, clarinet and flutes, have stories to tell, more than one, they have a wealth of ideas even, but they are always compelling, avant-garde and free but strongly rooted in melody and even the tradition, be it of jazz or of folk music. Five years ago they released their first duo recording, Györ, recorded in a Hungarian synagogue and one which is easy to recommend. On this album they further explore the initial collaboration, with more variation and probably more focus, but a little less expansive. Both musicians are extremely versatile and expressive, and they manage to create an eery focus and coherence in their improvisations. "Part 1", the long first track is absolutely stunning, especially in the middle part, when Léandre's arco plays in the lowest registers and Ákosh's sax follows as deep as he can, then surfacing with a beautiful melody which evolves into a piercing wailing, and when the bass switches to pizzi, the sax goes down again, murmuring consent, losing its voice ... to be replaced by small bells, offering the space for the plucked bass which out of a short improv comes up with a hypnotic rhythm over which the sax comes gently screaming, beautifully, agonizingly, which can count on the immediate sympathy of the arco bass which goes even further in deepening the emotional expressiveness. The responsiveness of the two musicians is wonderful to hear, and despite the fact that most of the music is very avant-garde, they share a common lyricism and sense of melody which is rare in such a usually abstract environment, and when Léandre sings/shouts once in a while, as on "Part 2" it is both bizarre yet bluesy in its raw depth. "Part 3" is a short piece with an incantation-like solo from Akosh, with lots of central European folk influences, heart-wrenching ... and on "Part 6" Léandre plays an unbelievable arco solo, producing glissandos which are almost Indian in sound yet combined with powerful plucking. "Part 7" brings a great ending to the album, with the bass and Léandre's power-whispers providing the rhythmic base for another highly melodic improvisation by Akosh. Whether the pieces are long ("Part 5") or short ("Part 2"), the fun of listening is there all the time. Music can be great ... I love it!

absolutely great this one. the first and last tracks are especially touching, but what's in between is no mere filler either. 'Zufall' with Akosh. S and eRikm is another great cd.