It's hard to keep up with Paul Dunmall : 8 albums released in 2007, 12 in 2006, 14 in 2005, etc. He is one of the true free jazzers around, still appreciating rhythm and lyricism, yet without real structure or themes in the usually long pieces, improvising along with whomever he is playing with at the moment. He is always full of energy, but in a controlled fashion, unlike the hurricane approach of for instance someone like Brötzmann, more spiritual, which does not mean that he doesn't resort to powerplay once in a while. He is a free spirit, a spiritual free spirit, an energetic spiritual free spirit. Most of his albums are worth listening to. It's always fun to hear him play, yet it's hard to say which of his albums would be the easiest to recommended. And that's possibly the cause of his prolific recording too. Each session is what it is, a performance in its own right. Onward and forward to the next one. As if the implicit statement is this one "you, listener, you can make your own choice, each piece is what it is, created in the spur of the moment, I perform what I perform, who am I to decide what I release or not? who am I to select what is worth releasing or not? so I release everything, so that you, listener, can be your own judge of what you like and don't like". Fair enough ... 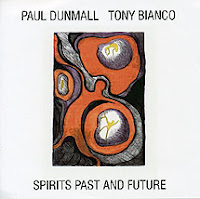 This album consists of two tracks : one 50 minutes long, the other 5 minutes. Dunmall plays tenor, Bianco drums. And the first track is long, it goes on and on and on, with shifts of intensity, sometimes slower, sometimes harder, interspersed with some drum solos, mostly with both musicians having a go at it, without restrictions, pushing each other on and interacting well. Fifty minutes is long for a duo to keep the attention going, yet at the same time it offers so much room for expansion, which they use as much as they can, and there's a reason why it doesn't stop. No constraints, no restrictions. Out there. Moving as you wish. Free. 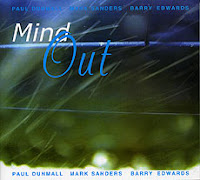 This trio consists of Paul Dunmall on tenor and soprano saxophones, Barry Edwards on guitar, and Marks Sanders on drums. The session was recorded in Bristol on 17 October 2007. It is a little calmer than "Spirits ...", more subdued at moments, which is certainly due to Edwards's presence. His guitar playing is minimalistic to say the least, yet his influence on the band's overall sound is important, his soft playing adds color and shadings throughout, and he creates the same effect as when someone starts whispering in a group of people, then everyone quiets down and starts listening more closely. His quiet playing, often with muted strings, limits the powerplay and makes for some sensitive moments, yet they can also move into very nervous intensity. Edwards also often uses his bass strings to accompany the band in the fiercer moments. Dunmall is as usual, keeping the energy going, playing continuously, often within the same mid-range of the instrument. The best parts are when guitar and sax intermingle in contrapuntal dialogue, full of chaotic sparks, with Sanders interacting perfectly, pushing guitar and sax forward. Lots of variation, lots of listening fun.

Paul Dunmall...thanks for the ideas. I added him to my radio! Hah!

I link you to JazzUtah.net/links