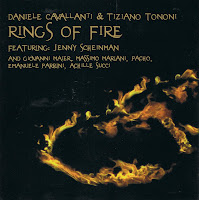 Italian tenor saxophonist Daniele Cavallanti and drummer Tizian Tononi, created a new project, composing two suites "Faces & Phases", to be played by some of the best Italian musicians, and with Jenny Scheinman on violin as the guest star. The "Faces"part, composed by Cavallanti, focuses on modern movie directors, including "Cassavetes", "Bertolucci", "Jarmush", "Wenders" and "Eastwood", the "Phases" part, composed by Tononi, are more inspired by nature. The Italian musicians include Giovanni Maier on bass, Massimo Moriani on electric guitar, Pacho on percussion, Emanuele Parrini on viola, and Achille Succi on bass clarinet and alto saxophone. The music brings a strange mix of modern jazz, fusion, rock, folk music, world music, avant-garde and free moments. The original idea was also to use the infinite possibilities of interaction between the two horns, the two strings and the guitar, together with the clear objective to create "lyrical tension, drama, power but at the same time always under control". And I must say, that they managed to make this programmatic approach come true. Not only are the musicians excellent, but so is the music.

"Faces" is melodic, starting in an avant-garde fashion, moving on into "Cassavetes", possibly the most jazzy piece of all, eery and agonizing. "Jarmush" is uptempo, a little more funky and fusion, whereas "Wenders" has a propulsive rock drive with heavily distorted guitar solo, yet "Eastwood" is the best piece, a great mid-tempo workout with excellent solos from Cavallanti and Scheinman.

"Phases", also starts very avant-garde, with eery and screeching sounds like seagulls crying overhead, accompanied by singing whales, with the guitar and drums intervening with some some more industrial sounds. "Motionary Tales" has more drama, with strong unison theme, evolving into a lighter tune with a steady beat, over which the soloists do their thing, although all accompaniment slowly ebbs away before the viola give as a gripping solo. "Before The Storm", the second long track, is much slower, with a great wild part in the middle, where all the solo instruments have a kind of battle for share of voice, only to rejoin a theme for a march-like tune. But I like "Landschape # 2" the best, with a combination of a folk tune with world music influences, a great bass clarinet solo over great percussive work by Pacho and a beautiful viloa solo by Parrini.

Variation enough, actually the tunes changes every few minutes, even the longest ones, yet despite that, the whole is pretty coherent. For some listeners there might be a little too much stylistic variation, though.