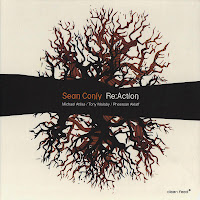 It takes guts to invite reputed musicians such as Pheeroan akLaff (drums) and Tony Malaby (sax) for a debut album, because they have created their own approach to music over the years. Add the second tenor of Michaël Attias to that, and you can only admire bassist Sean Conly to make this musical project really his own. He has a composing style which is very coherent : very rhythmic and often angular themes with stops and starts for dramatic effect. Yet on the other hand, he gives his band members sufficient space to work around the compositions, and it is in listening to the improvisations that you start to understand why he selected them. Not only because they are good, but because they understand Conly's musical approach without relinquishing their own style, especially Attias and Malaby fit well together, both free and sensitive players, stylists who know how to express emotions, with akLaff using his incredible wealth of ideas and experience to provide the necessary depth and contrast. The compositions are accessible without being mainstream, with long unison themes, and relatively controlled improvisations. On "Concrete Garden", ambient sounds are used, with some post-production, and it is the most overt sign of rock influences on the album, but they are present throughout the pieces, giving a powerful drive to the music, as on "Ulterior Motives", an uptempo rocker with a great theme and some wild soloing. The same approach is to be heard on the dramatic "Saitta", a real tension-builder, as is "Suburban Angst". Yet the music is as good on the slower pieces, as on "Luminiferous Ether", an duo improvisation between Conly and Attias, or "Refutable", allowing the saxes their full sensitive expressivity. This latter track is a beauty of restrained emotional power, with the two saxes circling around each other, tentatively, sensitively, played over a repetitive bass vamp and some subtle accentuating on the drums. And that's possibly Conly's strongest achievement : to make the whole band perform great music, with lots of variations, but it's primarily on the slowest pieces that the best results are achieved, possibly because of none of these pieces have clear melodic themes, and hence free-er in their concept. But again, it's without a doubt the variation that makes this album a great piece of music. And apart from being a good composer and band-leader, Conly is a great bass player too. We want more.