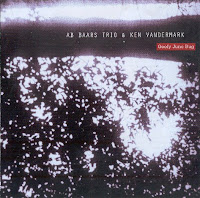 Ab Baars is a Dutch saxophonist & clarinettist whose music has been described as "joyfully obstinate", and that's indeed the case. It is music stripped to its essence of interacting sounds, without any recognizable themes or structure, and yet the music is full of lyricism and rhythm, however implicit it may be. His trio further consists of fellow countrymen Wilbert De Joode on bass and Martin Van Duynhoven on drums. They are joined here for the occasion by Ken Vandermark. The two tenorists find each other well on this album, and most of the credit goes to Vandermark who adapts quite well to the Baars's musical approach. Obviously, that should be no surprise in the more jazzy pieces, as in "Straws" or "Waltz For Monk", but more often than not the music is calm with abstract motifs and careful interplay. On "The Memory Moves Forward" Baars plays his shakuhachi, the Japanese bamboo flute, and it is easy to say that the zen-like approach of less is more, also permeates many of the other songs. But don't get me wrong : this is far from music for meditation, it is too active, too unexpected and too full of surprises for that. The title track, is suddenly totally jazz, full of funk, a real Vandermark tune, although composed by Baars, and some tracks which I thought were by Baars, are apparently composed by Vandermark. I must say that I have rarely heard him play in such a subdued and abstract way as here. Some tracks, such as "Prince Of Venosa", or the last one, "Lunch Poem", illustrate this well, bringing drumless soft movements of silence, with the horns intertwining, moving away and coming back, and with the most limited bass activity I have ever heard on record. It is a little bit too abstract to my taste though.

Hi! Just found this fine blog while looking for some reviews for Charles Lloyds latest album "Rabo De Nube" and I'm a happy man now. ;) As you cannot find all the good, fresh and new (free)jazz stuff just around the next corner, you gotta be busy looking for it. Your blog seems to be a good company for future purchases. Thank you!

I'm glad you like it. New reviews almost daily.

Suggestions are always welcome.
Thanks
stef