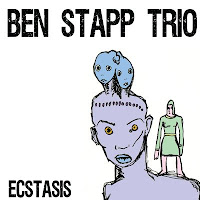 The tuba is such an usual instrument in jazz, that the kind of music that it plays (or what it is selected for), often brings a combination of playfulness, rhythmic power and world music. Maybe I am a little bit too influenced in my judgment by Michel Godard's presence on many Rabih Abou-Khalil records, but also by the excellent Trio Bravo and Trio Grande, both consisting of Michel Massot on tuba, Michel Dubrulle on drums, and with on the former Fabrizio Cassol on sax and on the latter Laurent Dehors. At least they're almost all called Michel ...

Now there's this excellent trio, led by tuba-player Ben Stapp, with Tony Malaby on sax and Satoshi Takeishi on drums. The music is melodic (and how!), fun, rhythmic (and how!), with themes often in non-western scales, mixing tight composition with improvisation. After several listens to this album, it is hard to believe that this is a debut album. Not only does Stapp wonderfully switches his instrument's role from providing the bass line to a solo instrument, the music is great too, as well as the room he leaves to the other two musicians to do their thing. Malaby is his brilliant self, blending in perfectly in Stapp's musical universe of now unison, then contrapuntal melodic exchanges and adding the controlled emotional component for which I like him so much. Takeishi too fits in perfectly, playing complex rhythm parts, yet adding subtle sounds and gimmicky details which make this trio so much fun to hear. Despite the trio's limited format, the band manages to bring variations in style, from funky and joyful tunes ("Painted Sharks") to slower and darker pieces ("Negative Space"), and then pieces which combine both ("Forgotten Stream") with often unexpected twists and turns. The real highlight is "Macchu Picchu", with tribal rhythms, wonderful harmonic changes and a stellar Malaby playing the lead melody. But Stapp himself is the real star of this great trio.