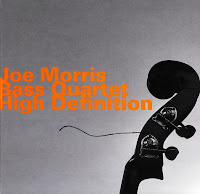 There is a big difference between Joe Morris the bassist and Joe Morris the guitar player. The former is a rhythmic and lyrical player, the latter is more abstract user of his own parlando style : the former sings, the latter speaks. That's a world of difference. To be honest, I prefer the bass player, which does not mean that he did not release fantastic albums as a guitarist, including his recent duet box with Braxton, to name only one. Here he is joined by Taylor Ho Bynum on cornet, trumpet and flugelhorn, Allan Chase on baritone and tenor sax, and Luther Gray on drums. Gray and Morris have performed on several albums together, and actually also recently, together with Allan Chase, in the Steve Lantner Quartet. The music is as free as you can expect it from these musicians, but always very rhythmic, boppish even at times, with Gray and Morris providing the solid, yet shifting foundations for the two soloists, two strong sylists by the way, to interlock and carry the tune, if that's the right word for this music. There is composition, there are themes, however implicit, but the real treat is how these four musicians comfortably move it into zones of opennes and surprise, adding to it, creating depth and emotional power to it, and most importantly, enjoying it. Tracks like "Land Mass" illustrate this well, starting with a unison theme over a solid rhythm, then Ho Bynum taking the first excursion with muted trumpet, with low growls and sad howls, against which Chase responds with more lyrical playing, working around the same tonal center, pushing Ho Bynum into even wilder territory of voiceless cries, while bass and drums keep away from the two struggling horns, leaving them to their battle, while maintaining the rhythm all along. But not all tracks are wild and uptempo, "Bearing" brings a calm and slow theme, with sensitive playing by all four musicians, and it suits them as well as the high energy parts. The theme of "All In One", on the contrary, could come directly from a 60s bop tune, full of the nervousness you may expect, finger-popping as it moves on, with walking-bass and great free soloing. "Super Spot" is a little darker, offering Luther Gray some opportunity for high energy percussion to support the gloomy horns. And the album ends as it began, with free-flowing sounds, more adventurous in approach, but also more interesting musically. One thing is sure : they must have had as much joy playing all this as I had listening to it.