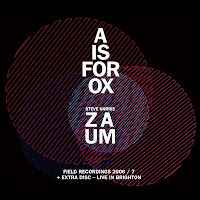 In January of this year British drummer Steve Harris died of cancer. After his fabulous "I Hope You Never Love Anything As Much As I Love You", a double-CD has just been released, with on the first CD a number of unreleased pieces, and the second is a live performance in Brighton in October 2007. I am not sure whether there is much music in the same category as this. Maybe some elements are common with Italian drummer Andrea Centazzo, certainly so in their total disregard for musical genre and an almost total open-mindedness for musical possibilities. I will classify this as "Avant-garde Jazz", but I'm sure Steve Harris would not have liked this classification. The music is improvised, creative, with a sweet and accessible touch, yet fully exploratory of space, moods and sounds. The electronics, guitar and violectra, together with Harris's precise drumming, create a shifting often rhythmic backdrop for many other musical things that happen, for the reeds to come and go in long stretched sounds, for voices that recite repetitive phrases, for ambient sounds to intervene, for silence and rare outbursts of power and violence, and a myriad of tiny things that happen in between. The major strength of this band is its unique sound and its capacity to improvise fully coherent musical pieces that sound preconceived, structured. Nice examples are "Somewhere in Utah", which starts slow and sweet, then evolves into a crescendo of intense electric guitar, real wild, then calms down again. On "Wake The Angels", the reeds and electronics create a slowly evolving soundscape, while Harris's drumming suddenly intervenes with raw uptempo drumming, increasing the intensity of some of the other instruments, but not all, some keep up the slow pace, leading to some great contradictory listening experiences, and then the track shifts into avant-garde sounds without clear structure, apart from a call-and-response between the reeds. The music can change from almost classical moments over King Crimson, jazz and avant-garde - a highly unusual cocktail, but one that is wonderfully intense and cohesive, despite the endless challenging and disruptive electronics, which add to the overall magnificence of the recording.

Now, a strange thing happens here, the poetry recited does not bother me at all, because the voice is electronically altered, and the sounds reminds me a little of Laurie Anderson, making this a pleasure to hear, rather than pretentious high-brow verse-mongering.

The band consists of Steve Harris on drums, Udo Dzierzanowski on guitar, Cathy Stevens on violectra, Geoff Hearn on saxophones, Karen Wimhurst on clarinets, Jim Black on guitar, Adrian Newton on live and found samples. Guest musicians are Andrea Parkins on accordion and laptop, with the voices of Kathie Prince, Tina Leeming, Fliss Kingston, Julie Harris on some of the tracks.

It is an extraordinary collective achievement. A wonderful album to remember Steve Harris.

Listen and download from iTunes. The disc version will be released in January 2009.