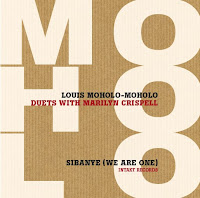 South-African drummer Louis Moholo-Moholo has played in many duo settings with pianists, including album releases with Cecil Taylor, Irène Schweizer and Stan Tracey, and now Marilyn Crispell has the honor to collaborate. And I must say, Moholo-Moholo is quite spectacular. After all these decades of drumming, a period in which he helped shape the European free jazz scene, his inventiveness remains remarkable, avoiding all the easy pitfalls of fixed patterns, automatisms and other mannerisms, his drumming creates the music, it sets the scene, develops the improvisation, ... Even without the piano, just listening to the drumming alone, this would be a worthwhile album, but then you have Crispell, whose style adapts well to the context, becoming more muscular and percussive than usual, yet keeping her sense of lyricism. Furthermore, they interact brilliantly. Sudden tempo changes -up or down - happen almost telepathically, with the most beautiful example being in the long "Journey", where after some breakneck speed playing, both musicians suddenly and simultaneously slow down, and Crispell's hypnotic right hand phrase shifts into an almost romantic melody. On other pieces, such as the opening track, her playing is limited to single notes of the right hand, gently interacting with the high energy percussion, slowly building up the piece as it moves along. And that's the magic that you get here: even as they play together, and quite intensely even, Moholo's playing can be hard-hitting, powerful and full of African elements, Crispell can still play her almost classical sounding style of jazz, and this in a perfect match with the drumming, "Phendula" offering the best example of this apparent paradox. On the title track, "Sibanye", the same happens: Moholo keeps the drive going, while Crispell weaves a sparse melody over the percussive storm. A great album on which both musicians excell.