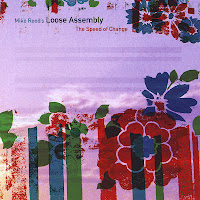 Just like last year's "Last Year's Ghost", this album by drummer Mike Reed gives me double feelings. Some of the tracks are excellent, such as the title track, but some of the other tracks leave me completely indifferent. The band consists of Mike Reed on drums, Greg Ward on alto saxophone, Tomeka Reid on cello, Jason Adasiewicz on vibes, and Josh Abrams on bass. Nicole Mitchell, on flute and vocals, joins on two tracks. Apart from the haunting title track, other noteworthy pieces are "Ground Swell", "X" and "Picking Up Greta". "Soulstirrer" starts out well, but then falls back in mainstream rhythm and melody. The same can be said about some of the other tracks, such as "Garvey's Ghost", a Max Roach composition, which is relatively bland here, and "Tezetaye Antchi Lidj", a Mulatu Astatqe composition, that sounds too joyful (and not raw enough) for the dark, bluesy and sensitive atmosphere on the rest of the album. And that's the sad part of this album, the original compositions work better than the covered pieces. Do the test, and play the album without them, you will see that the overall effect and sense of unity is much better. Yet this CD was praised to the sky by some more mainstream critics.