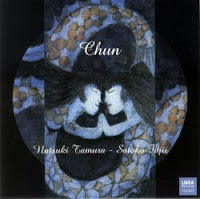 After in "In Krakow In November", "How Many?" and "Clouds", this is the fourth duo recording of Natsuki Tamura on trumpet and Satoko Fujii on piano, and it's again a hit. As usual, they are the masters of paradox, managing contradictory feelings and statements, mixing drama with fun, calm and nervousness, composition and improvisation, but all within the same very coherent idiom. The album consists of nine tracks, of which some are very short, such as "Tokyo Rush Hour", a very nervous and thundering piece, creating the typical almost cinematic imagery as on the duo's previous albums. The second piece, "Nudibranch", is dark and gloomy, "Curt Response" is bluesy and boppish, "Stone Flowers" is soft and melancholy, "Ultraviolet" is avant-garde, with Tamura sounding like a dying rhino hoping to be relieved of its pain, but they're still at their best on tracks like "Spiral Staircase", with long angular themes, played in fast unison, dramatic, powerful, physical in its delivery, full of counter-rhythms and energy. Fujii is a master in playing these wonderfully fast almost joyful unison lines with her right hand, while offering a different, dark and menacing story with her left hand. Staggering!

Tamura can growl, whisper, scream or produce crystal-clear sounds, just like Fujii is as comfortable in playing classically as she is on the inside of her piano creating bell-like sounds, or gamelan, or strange muted pluckings, ... a wealth of sounds created by just two instruments ...

The last track, "Triangle" is over twenty minutes long, and it evolves like a suite, with different themes and approaches, slow and eery, with alternating melodic parts, zen-like passages of absolute calm and moments of distress, alternating duets of solo piano or solo trumpet. And when you think that the whole piece is improvised, you get that typical surprise of a sudden break-neck speed unison line, after which the improvisation continues, evolving into a bizzarre dialogue full of short phrases ending in question marks, but then again, the finale is a rapid firework unison, fitfully concluding another stellar performance.

I'm sorry to be so excited.