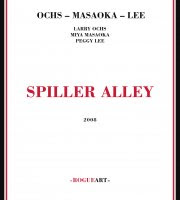 Regular readers may know that I am quite a fan of saxophonist Larry Ochs, not only because of his mastership on the instrument, but also because of his creativity in coming up with new musical forms, while still keeping his wonderful emotional delivery. An earlier incarnation of this trio released "Fly, Fly, Fly", with Joan Jeanrenaud on cello, now replaced by Peggy Lee, and with Miya Masaoka on the Japanese koto. The music has again this unique quality of being at the same time vulnerable, fragile almost and very solid in its emotional depth and daring in its adventurousness. This is music that you haven't heard before and it is basically beyond comparison. It is light, intricate like the best of lace, subtle, precise, genre-blending yet also genre-defying. It is light, sparkling and tasteful like the best of champagnes. Don't expect melody or fixed forms, the basis is almost zen-like, like bubbles of sound welling up out of nothing, unobtrusive and full of wonder. The three instruments play with the softest of touches to create a whole out of these tiny bits of sound, and these sounds themselves are often extricated from instruments in a way that's rarely been done before. At first hearing it may be a little tough to get into it, yet the more you listen to it, the more access you get to this strange musical universe, the more compelling it becomes. Highly recommended!