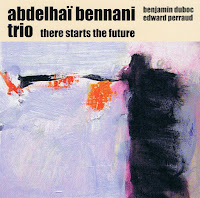 I had once heard Abdelhaï Bennani's "Ensounded" record, and qualified it maybe too fast as good but not more than that, but after listening to this performance, I may have to go back and revise my opinion. The trio conists of the leader on tenor, Benjamin Duboc on bass and Edward Perraud on drums. From the very beginning Bennani sets the scene by playing very intense, almost agonizing tones, in short bursts and wails, creating openness and tension at the same time. Duboc reacts well, both pizzi and arco, and Perraud joins with a very implicit rhythm, keeping the tempo yet playing assymmetrically, now on the toms, then on the cymbals, some rolls and a rimshot. The music hesitates, tries to move forward, perplexed and in full suprise, yet it moves on, and as a listener you would expect a moment of release, a moment when the thing explodes into unrestrained hitting, plucking and blowing. You can wait for nearly 30 minutes on that first track, but that release does not come, you stay in this little sound universe the trio has created for you : intense, open, hesitating, agonizing. That doesn't mean that nothing happens, quite on the contrary, the story they tell is an interesting and captivating one, there are variations, in Bennani's tone, in some sudden walking bass and tempo increase, but it just will not give that moment of release, before you know it, they're back in their small universe, as a trio, for a bass solo, for some powerfully subtle drum beats. The second track starts more uptempo, yet don't expect themes or patterns, Bennani keeps uttering his highly sensitive squeals, and then it evolves into slowness, with little sounds produced by the three instruments, apparently only there as boundaries for silence and open space, yet the slower they play, the less sounds you hear, the higher the intensity. You get the feeling that some huge thing is trying to get out, emotionally overpowering and potentially explosive, yet it doesn't, it's duly chained within this trio's sound universe, making the story even more compelling. And that's the amazing paradox of this trio : how free improvisation can create such a powerful feeling of confinement and restraint (whether deliberate or not). A great listening experience for those with open ears. 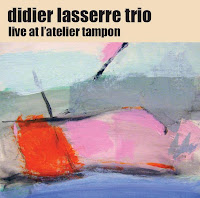 The second album brings us a trio consisting of Didier Lasserre on drums, Sylvain Guérineau on alto, Jean Rougier on bass and reed flutes. The performance is built up of four long tracks of free improvisations by these three excellent musicians. The music is warmer than Bennani's, more jazzy in its overall sound, yet as free as it gets. Yet despite the tracks are only half as long as on Bennani's, there is also a little less focus in the improvisations, despite the intensity and the adventurousness. The best track is 18 minute long "La Tregua", on which Guérineau's playing is quite emotional and the overall progress of the trio's interaction more coherent. The sound quality is not superb, it all sounds as if you're listening from a distance, but the enthusiasm of the small audience, their spontaneous reactions and applause make up for it. A nice performance.